PUBLISHED
SHARE
Stuart Aitken, Head of Brand & Content at Digitas, outlines the key findings of new research which shows that Black Friday continues to be a key feature of major retailers’ marketing plans – especially in the UK.

Much has been written about the impact of Christmas creep and new initiatives such as Cyber Monday have had on Black Friday, with evidence suggesting a recent drop in interest in the annual sale. We wanted to find out to what extent this was reflected in social media activity – especially in the UK. What’s more we were interested to find out which brands were most actively involved – or wanted to most associated with – Black Friday.

Our research threw up some fascinating findings. For example we discovered that 2017 was the biggest year for social activity relating to Black Friday in the UK with posts exceeding half a million for the first time. Looking at brands, we found that Tesco was the most active UK retailer posting about Black Friday on Twitter, while the biggest mover in the list was John Lewis which dramatically ramped up its Black Friday social activity, increasing its Twitter activity by 3573% year on year.

The full results and methodology are outlined below and can be downloaded as an infographic here.

Biggest year for Black Friday in the UK

New social media analysis from Digitas shows that Black Friday continues to be a key feature of major retailers’ marketing plans – especially in the UK – despite the impact of Christmas creep.

At a UK level, growth has been more consistent. Initial interest was slow but rose rapidly in 2014. While interest waned in 2016 (possible as the novelty factor wore off and personal finances diminished), 2017 saw the highest interest ever in the UK for Black Friday with posts exceeding half a million for the first time.

Black Friday more popular in the UK than US

However, when measuring social activity per capita, the UK performed significantly stronger than the US - with 8,448 posts per million versus 7,882 per million – proving that on a fairly weighted scale, Black Friday is now proportionally more popular in the UK than the US.

Newcastle and Northern Ireland most vocal about Black Friday

The most socially active bargain hunters in the UK reside at the extreme ends of England with Newcastle narrowly beating Brighton into second place.

The south coast featured strongly in the top five with Brighton in second place, Portsmouth in 4 and Bournemouth in 5.

On a national level, Northern Ireland outperformed the rest of the UK on a post per capita basis, followed by England, Scotland and Wales in fourth.

Despite decreasing its posting activity (-44% YoY), Tesco easily maintained its dominance as the most active UK retailer on Twitter in the run up to Black Friday, with a total of over 2.5 times the number of tweets of John Lewis.

The biggest mover this year however was John Lewis. Normally not very active around Black Friday on Twitter, the retailer upped its game this year, increasing posts by a staggering 3573% year on year.

Also noteworthy, despite helping to bring Black Friday to the UK, AmazonUK tweeted a mere 15 times during this year’s run up.

However, despite its own Twitter inactivity, Amazon UK received the highest number of mentions in the run up to Black Friday – followed by Tesco, ToysRUs and Marks & Spencer. John Lewis finished 7 showing that they still have some way to go if they want to be closely linked with Black Friday.

The research revealed that men love a sale almost as much as women, with 48% of identifiable posts (45% of total posts) being sent by men and 52% coming from women.

When looking at the age ranges tweeting about Black Friday one group emerged as the clear winner. The 35 and above age group were 75% more likely to tweet about Black Friday than the second most active group (17 and under) – although it should be noted that only 18% of post have an identifiable age.

Surprisingly, when looking at musical affinities Paramore emerged as the act most likely to be tweeted about by people who also tweet about Black Friday. The American rock band beat Beyonce into second place and were also followed by Miley Cyrus (3), Harry Styles and One Direction (4) and Justin Beiber (5).

Filters were then applied by county and city to provide geographic breakdowns.

Along with timeline and UK only filters, additional filters were also applied to separate out specific brands of interest.

The largest sample sizes allowed by the tool were used at each stage.

Data was exported to Excel to provide additional cross comparison and breakdown potential.

Owned brand data was provided by the use of http://www.mysocialtools.net/

14 brand Twitter accounts of interest which have been tracked from 2011 to the present were combined and then the raw and underlying data was exported to Excel to provide additional data breakdowns.

Brand accounts used were UK specific where possible but data could otherwise not be limited to just UK. 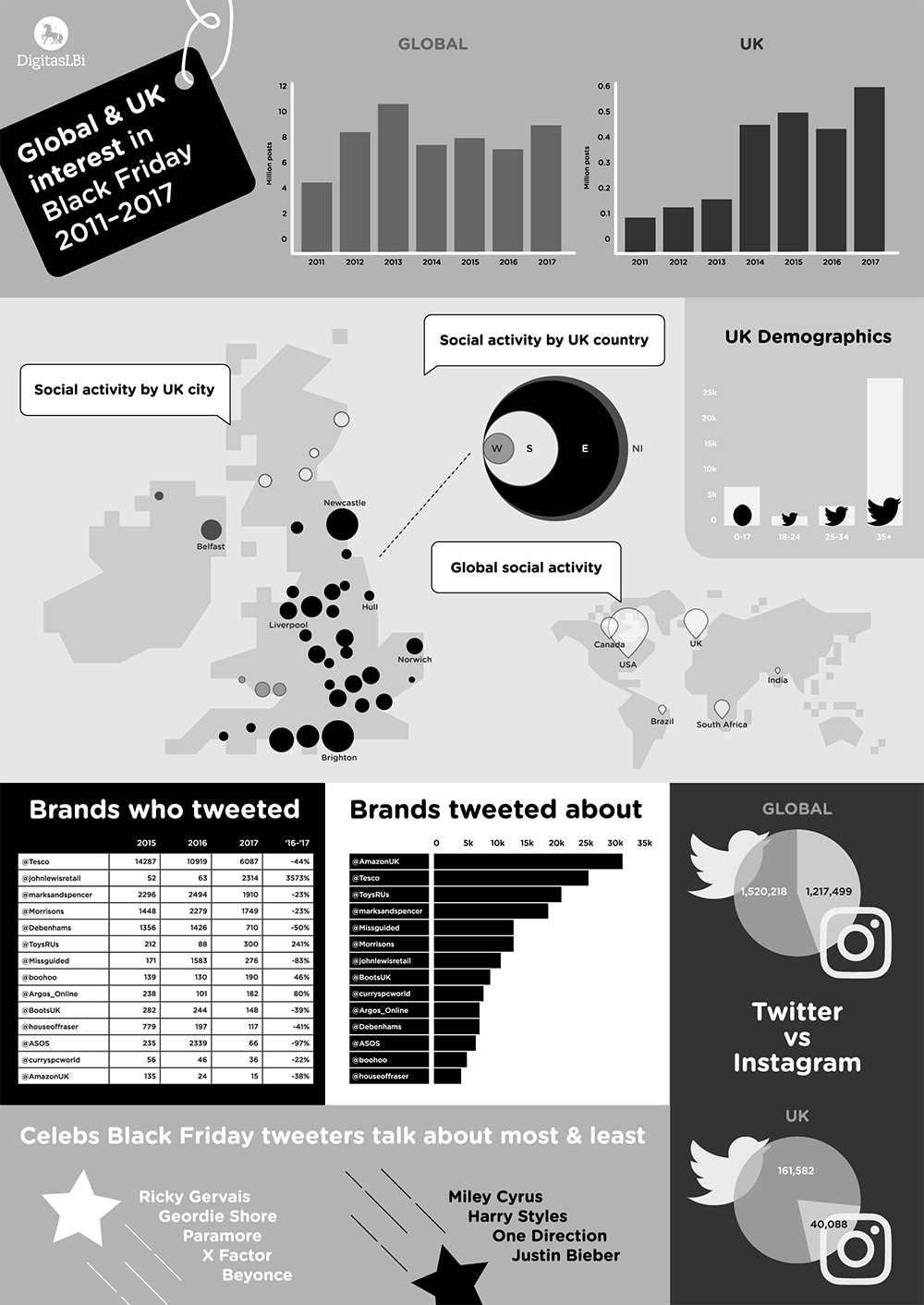 What is AlphaGo Zero and why should you care?