When Ada’s muse, Charles Babbage, showed her the designs for a theoretical ‘analytical engine’ she imagined the potential uses for the machine, far beyond the calculations Babbage and his team had considered. She wrote them up in an elaborate set of notes containing an algorithm designed to be carried out by the machine. This became the first recorded computer program. Perhaps had she not died two years later at just 37, she and/ or Babbage could have actually built their computer, 100 years ahead of schedule.

75% of the people employed in Bletchley Park’s code breaking project during World War II were women. Some such as Jean Clarke, MBE, were instrumental in the decryption of the Nazi Enigma project, considered to have shortened the war by two years. Initially, their role was restricted to the administrative tasks involved, as a male section leader suggested, “Women wouldn't like to do any intellectual work”, but soon a thriving club of ‘Boffins and Debs’ proved him wrong, and along the way, inspired Turing’s work in the development of computer science.

In a startling dramatisation of the faulty lens history has placed on the role of women in technology, the women instrumental in bringing the first (official) general purpose computer to life was buried for decades. Until Kathy Kleiman probed further, the women pictured operating the computer were assumed by staff at the Computer History museum to be ‘refrigerator ladies’, the mid 20th century version of ‘booth babes’.

Grace defied sexism as a software pioneer and military leader. She defied ageism when rejected from the military at 37 for being too old, but crucially she defied the prevailing wisdom that coding languages couldn't use English when she developed COBOL. She hung a pirate flag in her office at the Pentagon, was famous for stealing stationery supplies and took absolutely zero prisoners.

Katherine was a maths prodigy lucky enough to have parents prepared to defy the restriction of access to education that black students suffered in 1920’s America, which required the family to travel across state to schools prepared to teach black students past eighth grade. She graduated high school at 14, college at 18 with degrees in maths and French and was the first African American woman to attend grad school at West Virginia University. Little wonder that when she worked in NASA’s racially segregated, patriarchal workplace she defiantly worked her way to the prestigious Spacecraft Controls Branch. She calculated the trajectory for the first manned US space flight, John Glenn’s earth orbit, the Apollo 11 and 13 moon landings and critically, Apollo 13’s safe return. 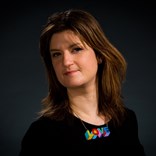 Five (more) reasons for everyone to fear Amazon