But I have to admit that the same clever folks who were the first to celebrate the industry’s game-changing work (the Titanium Lions) and storytelling-that-doesn’t-suck (the Branded Content & Entertainment Lions, now called Lions Entertainment) also gave the industry the push it needed—to recognise data as precious fuel for creativity.

From the get-go, we’ve been enlightened by great work that wouldn’t have been possible without data. It’s encouraging to see data being increasingly embraced, not just as retro-fitted points in a case study or a ticked checkbox to make us sound smarter. It’s official: The luddites have been silenced, and this is now the category to win—for agencies, and for clients.

Data and creativity need each other. But to come up with an idea that people will discuss, debate, like and share, it still takes messy, insecure, A.D.D., curious human minds to crunch, find potential and ultimately turn all that data into (drumroll, please) ta-da! Hopefully you’ll find that magic in these picks.

(But please, Terry, no more new categories, please. I have data to prove that agencies can’t afford more categories.)

By creating the face of vulnerability, Graham showed us how much our bodies would need to evolve to survive a low-impact crash. Data from road-safety history, medical research and human anatomy led to the creation of Graham, a shocking reminder of why the human anatomy is not made for car crashes.

Hey, data team, give us wonderful and weird data points. By tapping into listeners’ data, Spotify humanised technology with a hyperlocal, relevant and hilarious peek into the music-lover’s mind. And it was created by Spotify’s in-house creative team (you’ve been warned, agency friends). 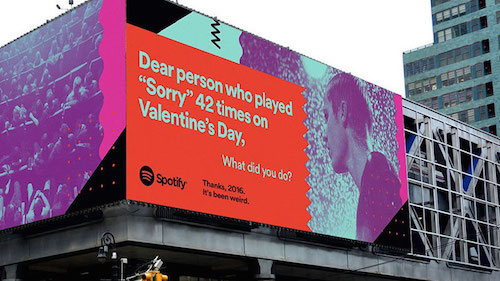 Gleaning data from half a million fashion images over the last 10 years, while taking into account social sentiment for preferred styles, we witnessed the world’s first cognitive couture collection. By pairing Watson with Jason Grech, IBM forecast a beautiful line for the new season.

The media are as guilty as anyone else when it comes to judging female athletes’ appearances instead of their accomplishments. Dove used data analysis and an AI algorithm to identify sexist quotes in real-time—70 million sexist media comments, to be exact! People power took it from there and shared the offensive quotes directly back to the media outlets.

How do you inspire runners to find their full potential? This full-sized LED running track collects and visualizes your running data so you can compete against what matters most—your personal best.

Ronald leads the creative charge for Digitas’s six offices in North America, and is at the helm of a 600-strong team of creative forces fueled by a unique combination of data, technology, and storytelling.

Can data make you funnier?