Netflix has turned out to be not only the biggest competitor to streaming services, but broadcast and cable, too. As a result, they’re all fighting back and formulating plans to reclaim viewership – think ad-free premium versions, the resurrection of old shows like ‘ER’, and celebrating first access to shows to name a few.

What exactly is the battle everyone is fighting, though? It’s simple: with greater connectivity, second-screening, better utilisation of people’s downtime and multi-tasking all at play, people now have more than a 24-hour day in which to consume content. In fact, Wolf at WSJDLive predicted back in 2015 that they have 31 hours, 28 mins, to be precise.

The fight isn’t a linear vs. digital one. It’s all about attention.

Netflix has successfully created more time in the day by eating into people’s sleep. Based on search data from Google UK, arguably the richest form of intent, primetime Netflix viewing is between 00:00 and 02:00 – immediately after linear television’s primetime ends. 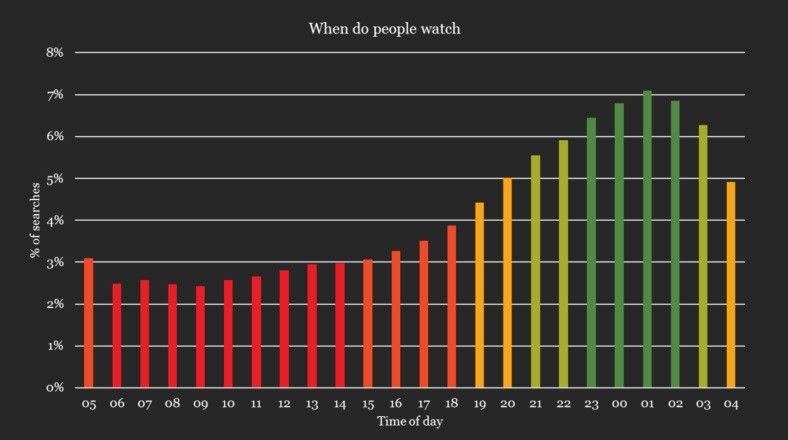 Netflix have given hints to this in the past on Twitter:

“Sleep is my greatest enemy”

Rather than thinking in a linear 24-hour day and establishing when they can compete, Netflix has strategically captured and retained people’s attention at night. During the wee hours when we’re supposed to be sleeping, shows like ‘Brooklyn Nine-Nine’ and Money Heist’ have 38% and 37% of their viewership respectively. 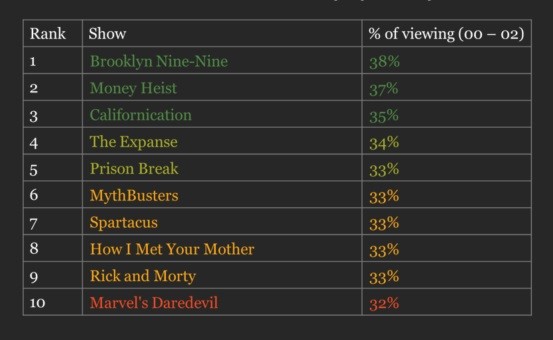 It’s possible this was achieved by design, and a true reflection of a customer-first strategy. Or, perhaps Netflix picked up on this user behaviour and adapted accordingly.

Remember when Netflix’ redesigned to a white background? It never took them long to change back to a dark grey – much more suited for late night vs. surgical white.

While there is overlap between linear and Netflix primetime – 59% of demand for Netflix’s top 50 shows is between 19:00 and 04:00 – the content itself is the foundation for holding people’s attention, regardless of how it’s delivered.

Exploring data behind Netflix’s shows further, we get a sense of their content strategy: shows rated 8+ on IMDb are more likely to retain people’s attention later into the night, with 60+ minute runtime keeping us watching until the very end – even if it means we’re tired the next day. The same can be said about genre too; Marvel ‘Action’ shows are the worst offenders, retaining our attention up until 04:00.

It’s not just adults either; children’s favourite ‘PAW Patrol’ is arguably having the opposite effect, with kids waking up earlier to watch prior to school.

Who’s staying up late at night

What’s more interesting is the audience behind the content: we found that Netflix clearly targets 25 – 45+ y/o, with females outweighing males.

Removing ‘MythBusters’ and ‘Rick & Morty” from their respective genres, females outnumber males on average across all genres. Using Facebook data, which houses a large chunk of the world’s ‘likes and interests’, we explored which shows differ by audience.

Comparing viewership preferences of different age groups, there is no overlap between our two chosen age groups. Shows like ‘Pretty Little Liars’ or ‘Daredevil’ are geared primarily to 18 – 24 y/o, with ‘Shameless’ appealing to 25 – 45+ y/o. 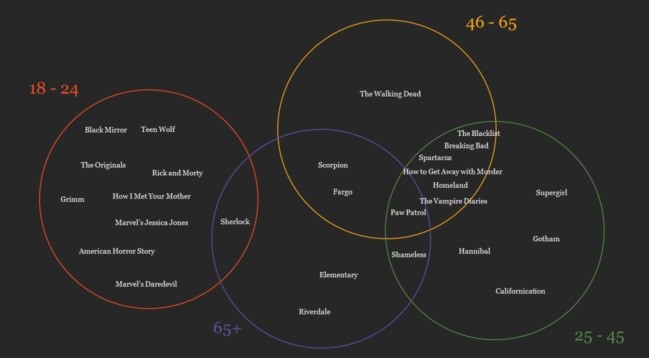 Netflix aren’t going head-to-head with other streaming providers, broadcast and cable. Instead, they’ve re-imagined the challenge and are competing for people’s attention.

This comes at the expense of people’s sleep, something that many have already noticed the likes of Facebook, YouTube, Google and other forms of connectivity encroaching on.

We’ve seen this shift before in the experience economy, where people moved from services and products to experiences. Attention is another example of this ‘disruptive’ behaviour.

VIEW ALL ARTICLES BY Michael Thomson

Out of the closet and into the agency