PUBLISHED
SHARE
Peter Drake, ECD at Digitas London, reveals that his recent tech purchase is "like something out of 2001"; he can't possibly decide on his favourite TV show and suggests that being hungover is a good shortcut to the unconscious mind.

Obviously, Nike's Nothing Beats a Londoner campaign. This is big, bold and brilliantly executed. This made me excited, and energised, and reminded me how great advertising can be. Full of confidence, wit, insight and executional ambition. Crucially, it created an aspirational and authentic connection, giving an identity to an instinctive feeling…

I also totally love the latest Ovo campaign. For so long the liberal, environmental concerns have been politely couched in fear or restraint. This taps into anger and fights fire with fire. It has a metal soundtrack. It rocks. More please.

What website(s) do you use most regularly and why?

I’m from North London, so obviously The Guardian; that keeps me sane and reassuringly entrenched in my own content bubble. I also like Wired. And Futurism on Instagram is consistently interesting. Because I’m also a luvvy I read Hollywood Reporter a lot. Oh, and I also obsessively check Tesla.com for updates on the Model 3 I ordered two years ago…

What’s the most recent piece of tech that you’ve bought and why?

An Amazon Show. I’m not sure if it’s actually any good but I like it. It sits there in the kitchen making random suggestions, telling me the weather and playing music. It’s very chunky so the kids don’t nick it like they do an iPad. If you get it in white it also looks like a prop from 2001: A Space Odyssey, which makes me happy. I just need some family or friends to get one so I can drop in on them unannounced at any time and see what they’re up to.

And Nurphone Headphones. Nura are a new Australian brand and these headphones are amazing. They calibrate themselves to your individual way of hearing – and the difference it makes is astonishing. Once you’ve tried them you can’t go back. I’m still a little wary of using them out of the house, because they’re so immersive I’m slightly worried I’ll step in front of a bus or something. If sound is important to you, you need these.

Surprisingly, it’s back to Twitter. That’s currently giving me the illusion of choice in my information sources. I’m also a sucker for Instagram Stories, which enables me to see what my team is up to at any given moment. Facebook feels like it’s jumped the shark.

What’s your favourite app on your phone?

WhatsApp, Spotify and Waze. Basically, Waze is the best satnav that exists. Apparently, it’s responsible for the death of navigation based conversation in LA.

What’s your favourite TV show and why?

That’s a ridiculous question! Any answer I give is merely a passing reflection of my current thoughts. And favourite doesn’t mean best. Best recently is Handmaid’s Tale. Favourite, though, is probably The Sopranos. Or Breaking Bad. Or Fargo Series 1. Or Better Call Saul. Or…

What film do you think everyone should have seen and why?

Probably 2001: A Space Odyssey, because it described the future in a way that is becoming a self-fulfilling prophesy. It’s biblical-level story telling. That film had everything in it that we’re doing now; AI, voice etc, and its production design continues to influence design direction in so many ways (e.g. Honda EV Concept).

When the world saw Elon Musk’s Falcon Heavy Booster rockets landing back on earth, that looked like an extravagant tribute to Stanley Kubrick. If you want to see technology used in the service of incredible story telling, this is the film to see.

Also, if you’re a fan of three-hour-long German comedies that confront the bleak reality of human existence, then I massively recommend the film Toni Erdmann.

Where were you when inspiration last struck?

I couldn’t say for sure, but it nearly always happens when I’m walking, and not consciously attempting to think of anything. I think things need to percolate for a bit in the unconscious. Being hungover is also quite a good short cut to the unconscious, although not a great long term strategy.

What’s the most significant change you’ve witnessed in the industry since you started working in it?

As we’ve become better at making things look and sound amazing, we may have become less good at the actual ideas part. That, and er, the internet starting up.

If there was one thing you could change about the advertising industry, what would it be?

What or who has most influenced your career and why?

I’m hugely influenced by films. I love the early films of Pixar – especially Toy Story - which perfectly bring to life the experience of a childlike sense imagination and wonder – which is something I strive to keep alive in myself everyday.

The author Kurt Vonnegut. He lived through some horrific experiences and his yet his world view remained consistently amused (if bleak).

And a couple of inspiring creative directors who’ve had a big influence on me - Paul O’Higgins, who taught me to be a magpie, and Russell Hicks, who always had faith and belief in me.

Tell us one thing about yourself that most people won’t know.

I was at school with David Walliams. In our final year together I won the school acting prize ahead of him. I hope he’s over it now. We haven’t spoken much since… 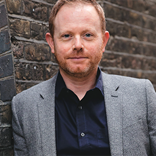