PUBLISHED
SHARE
Voice is the natural medium for delegation, but today’s voice assistants do not substantially offer it. Google’s announcement of Duplex is a step towards assistants that are good at delegation. The prospect of large audiences who are in the habit of delegating to machines creates a new surface for influence and trust. It is both a threat and an opportunity for brands.

For all the popularity of ambient voice assistants like Amazon’s Alexa, the products in market today are not really “conversational”. Instead they allow voice commands to trigger a variety of functions, instead of, or as well as, using a screen.

This leads to mismanaged expectations. We are used to having conversations, not merely issuing commands by voice. Yet attempts to engage Alexa in conversation typically fail (an early New York Times reviewer said, “If Alexa were a human assistant, you’d fire her, if not have her committed”). As a result, as reported by Jason Hong and others, owners of these devices go through a few initial days of enthusiastic experimentation before settling into a stable pattern that involves a very small number of commands they use regularly (eg, “what time is it?”, “what’s the weather”, “play”) — in spite of Amazon’s encouragements to try new things.

Delegation is natural and valuable

In our work on developing voice assistants, we quickly found that people were much more enthusiastic about the ability to delegate tasks than they were to perform complex functions interactively. This is challenging, because your willingness to delegate is very dependent on your confidence in your assistant. Those lucky enough to have human assistants build trust relationships: when delegation works, it’s very valuable.

When machines can call people to get things done, much more delegation is possible

At its developer conference this year, Google presented Duplex, an “AI system for accomplishing real world tasks over the phone.” Duplex calls people in specific business contexts and has successful conversations with them without the recipients of the call realising they’re talking to a machine. It’s very impressive: listen to Duplex booking a haircut (0:56) or booking a table at a restaurant (0:50).

For example, if you want to book a haircut (Google Duplex’s first example), you’ll find that many hairdressers don’t even have on-line booking, never mind membership of some API to allow their availability to be aggregated. In our work, we used Twilio to attempt to solve problems like these, by making outbound IVR calls. The way to make this feel natural was to make the dialogue asynchronous: responding to the request with “No problem. I’ll get on it.” allowed the person to get on with other things. When there was a result we could interrupt and give an update. 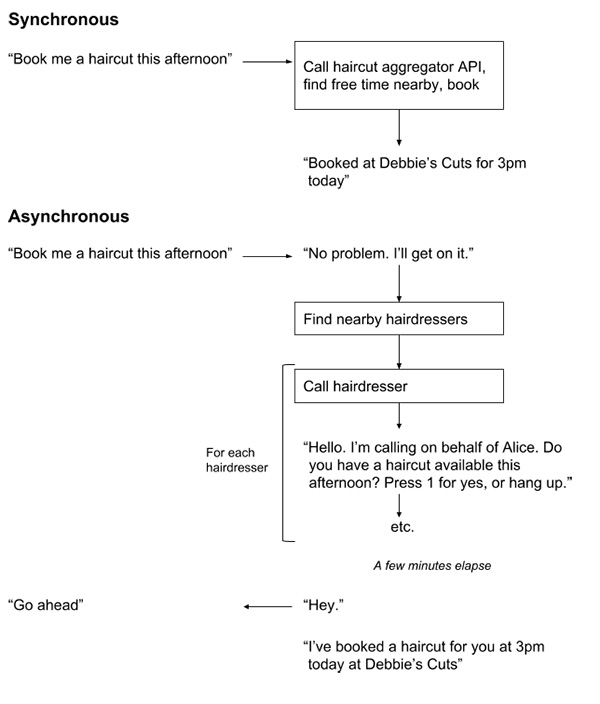 The fact that there was a delay in the asynchronous case was not regarded as a problem; in fact, it felt much like a similar conversation with human assistant. And the delay need not be long: a human assistant would have to make one call at a time, whereas with Twilio we could easily make 50 or 100 calls simultaneously.

Google Duplex solves an important problem with this approach, which is that many recipients of outbound IVR calls ignored them, especially in a climate where “robocall” fraud is on the rise.

A new surface for influence and trust

The attraction of delegation is that it takes things off your plate so you have more attention for important, valuable or enjoyable activities. It requires trust, because your delegate has to be able to make decisions and act on your behalf. Once you establish a trust relationship, it rarely stays still: it breaks or it grows. And a voice interface, with no visible edges, creates the fastest opportunity to grow — and a larger risk of breaking.

The threat here for brands is disintermediation. Imagine a conversation with a human assistant who you know and trust. Your assistant wants to get things done for you, understands what you like and what you don’t, and is motivated to get value for money. Do you discuss brand choices with your assistant? Sometimes, sure; the greater the trust, the less you need to. As more purchase decisions are delegated, brands need to pay attention to influencing the delegates as well as end customers.

The opportunity is that delegation-trust relationships with machines is new territory. The conventions are not yet baked. A dominant design has yet to emerge. Brands put a great deal of effort and equity today into being trusted. Those bold enough to explore this new relationship surface are racing for leadership in this new, intimate and operational kind of trust.

Lorenzo leads his team in identifying and developing strategies and new technologies across capabilities for Digitas at a global level. With a career spanning over 30 years, his work in digital media dates back to the days of Web 1.0.

In conversation with Sara Wachter-Boettcher

VIEW ALL ARTICLES BY Lorenzo Wood