Who is Chrissy Teigen?

Some know her as the bombshell Sports Illustrated Model, others as, Grammy  award-winning artist, John Legend’s wife, and finally, as the brutally honest, Twitter queen, that isn’t afraid to speak her mind, truly cooking up a storm.

We all have a vague idea on what goes behind building a brand, or are self-proclaimed experts -  but what truly goes behind building one’s own brand? And given that, is Chrissy a brand visionary? If so, how did she get there? Was it just her famous, unapologetic, clapbacks or years of “silly, hard work?”

My findings would support - it’s the perfect combination of both.

From the research I’ve gathered, Chrissy Teigen, the marketing trailblazer’s online presence and fame boils down to the following simple equation:

Her unapologetic opinions on things that matter to her and her audience (to the extent of even calling out the former president of the US) + A real portrayal of her life - cheesy social posts = her authentic brand, that keeps people enamored and going back for more.

Let’s add a little bit of marketing and a whole lot of genius, to uncover the principles that go behind the brand that is, Chrissy Teigen.

...And that’s the paparazzi. They hold a major weapon - the power to leak information and take unsolicited photographs whenever, wherever. The ‘paps’ have done this to almost every celebrity, spanning from Hollywood to Bollywood. If they think a story will sell, they’ll be there ready to make millions from it, no matter the human cost. As a result, audience attention gets directed to the gossip columns and tabloids, whether it’s true or not, it makes for a good story, right?

Not quite for Chrissy Teigen - her online persona is true to who she is. She isn’t over-editing pictures and worrying about the real one getting leaked. Instead she is the real deal and has been able to cultivate a palpable fan following over the years, because she’s serving that to her fans on a platter.

In case you didn’t know, here are a few of those unedited pics uploaded by her and a very honest and raw account of something she went through. Allowing fans to gain an insight into the person behind the fame.

Check out her MEDIUM article - Tip: Hope you’re wearing waterproof mascara for this one. 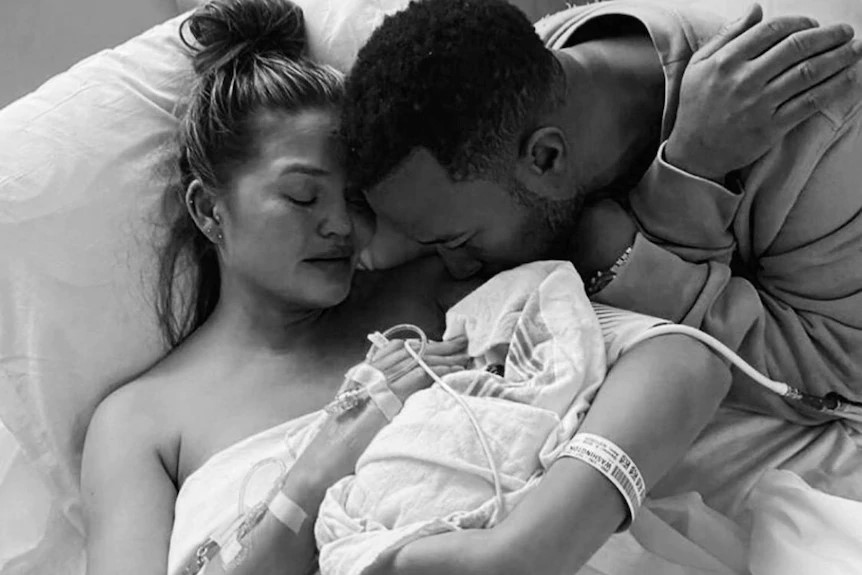 Sharing her loss with more than 44.6 million followers on her social media channels.

What’s bizarre to me is that what seems to be an easy and straightforward approach to building a brand, is such a unique strategy to her. Why try so hard to paint a picture of an idea of someone you can be? When all your curves and all your edges, all your perfect imperfections - is worth putting out there, for the world to eat, right up (and she’s dishing out the ingredients to do just that).

Let’s look at Bollywood, most celebrities who fit the same profile as Chrissy Teigen, i.e. are mothers, wives and have a substantial fan following, haven’t been able to drive any business through a brand they have built around their own persona. Instead, their go-to is to shy away from social media, apart from when they are promoting endorsements.

On the other hand, there are young celebrities in Bollywood like Priyanka Chopra, Deepika Padukone, Anushka Sharma and Alia Bhatt, who have tried to positively channel their fandom into business action through forming real connections. If you go on either one of their Instagram profiles, they try to post BTS of their everyday life, all steps towards building their brand, while promoting their ‘side hustles’ that range from a clothing brand to an autobiography - each moving away from their traditional methods of monetizing their brand.

It takes a lot of courage, thick skin and emotional support to deal with the sh**t that the media can serve you.

But, if you know who you are and how you want to be perceived, that’s the simplest strategy to just run with. At least, that is how Chrissy has been able to do it, and I am sure many are following in her footsteps.

As noted by writer Amanda Legault, “she has seamlessly made her audience, that she a multimillionaire celebrity, is just the same as me and you.”

That is what makes her brand so strong and unique to her. Through her active engagement with fans she continues to go above and beyond for them, as you would expect and do for a friend. Many other celebrities are also trying to build their brand and become internet influencers, like Teigen’s friend Kim Kardashian. However, Chrissy Teigen has a touch to her brand that is her USP and no one can quite master it the way she has.

So, who is Chrissy Teigen afterall?

She's not just a celebrity, model or wife, she’s a force to be reckoned with in the marketing world. She acts as a reminder that even the biggest brands can have marketing strategies as simple as connection through authenticity. This identity she has worked so hard on, has attracted endorsements, book contracts, talk show deals and so much more - that’s why Chrissy Teigen, runs a digital empire and no one can touch her. If they do, you’ll be served (a well researched) clapback that will rock the interwebs and beyond.