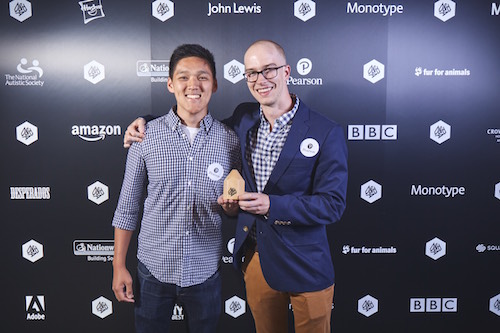 The author and Jason Gan with their award

Instead of overeating hotdogs and watching fireworks over the Charles River, I spent this past 4 of July swilling cask ale and mingling with the bartender at a pub in East London. It was two days before the D&AD New Blood Awards, and I was ready for the show.

The New Blood Awards call upon creatives 23 and under to tackle briefs from big-time international brands. Out of the 16 briefs, my partner Jason Gan and I chose Pearson. The brief challenged us to think about the state of education in 2027, come up with a problem that might plague learners, and then solve it.

We created Pearson Passport, a chat platform that enables young students to learn new languages with virtual pen pals from different countries. And, believe it or not (we didn’t at first), it won a pencil. Hot damn.

Fast forward two days later to the awards show. As we awaited the announcement of our pencil, Jason and I sat among some of the brightest young minds in advertising. We listened to the keynote speakers. We spoke to Pearson’s design team. We overheard some interesting conversations. And we learned a few things:

1: Good ads don’t feel like ads: They’re insightful stories that can fit into any medium. They’re clever, interesting and well-crafted, because today’s audience can spot half-assery from a mile away. For example, the winners of the coveted black pencil created a short film for The National Autistic Society expressing the challenges that autistic individuals face as they transition into adulthood. It was moving—it shed light on the inner-workings of an autistic mind in a way we’ve never seen before. We wished we had thought of it.

2: I can’t have just one forte anymore: As storytelling stretches across more and more channels, young creatives’ skills must diversify. The days of being just a writer or just an art director are over. We need to pick up extra chops, whether they be in animation, photography, design, anything to enhance ideation and creative executions.

3: Just give us a shot: Young people emit energy and enthusiasm. And we just want a chance to prove ourselves; a chance to make something that positively impacts the world. We’re compassionate. We’re clever. And we’re too young to be jaded. Hire us and let us work with people we can learn from—you’ll be amazed at what’s possible.

“These are the people shaping the future of advertising. They’re the ones we look to when things need shaking up.” – Bruce Duckworth, D&AD President and co-founder of Turner Duckworth.

“Hot diggity damn.”– Me, talking to Jason about our pencil win. 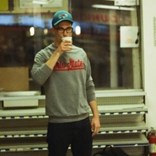