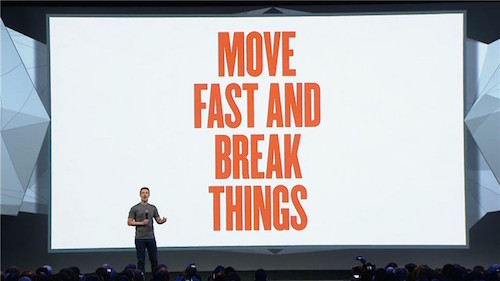 “Move Fast and Break Things” was an oft-quoted mantra of Facebook, at least until 2014 when it was replaced with the more shareholder-friendly “Move Fast with Stable Infra[structure].” The old mantra reflected the culture of the company in the early days, when great importance was placed on being first to market and letting consumer usage and behaviors determine the success and ultimate direction of Facebook’s products.

However, as consumer usage of Facebook continues to rise, and digital advertising revenue piles up on Facebook’s balance sheet, a new mantra may be more appropriate:

“Break the economics of journalism, and move cautiously to fix it while preserving revenue streams.”

What would shareholders think of that?

This past week, it was revealed that Facebook was moving forward with plans to test paid subscriptions for publications through Facebook’s Instant Articles product. Essentially, pay-wall or freemium models that exist at publications including the New York Times, Wall Street Journal and others could be enforced via Instant Articles, meaning a Facebook user would need to have a subscription to access this content within the Facebook app.

The move is designed to entice more usage of the Instant Articles product by publishers, who are already receiving 100% of the ad revenue for any ad sold by the publisher, and 70% of the revenue for any ad sold by Facebook. Some publications, like Buzzfeed, have jumped feet first into Instant Articles, while others have recognized that their subscription and advertising revenues would potentially suffer if the reader never has to leave the Facebook app to consume the content. Bye-bye unique visitors and page views.

Because with nearly half of Americans relying on Facebook for access to news, Facebook recognizes that they need these publishers to do the heavy lifting and hard work inherent in journalism. The quality of the news must be maintained in order to keep consumers thumb-flicking through their feeds. As the #fakenews movement erodes consumer trust, so erodes the attention that Facebook needs in order to maintain consumer interest in the news feed. With Facebook accounting for one out of every six minutes spent online, and one out of every five spent on mobile, that’s a lot of in-feed ad revenue to protect. Right now, there is no clear single threat to siphon consumer attention, but Twitter, Snapchat, and Apple are all solid contenders if Facebook can’t keep users in the feed.

In a not-so-shocking coincidence, David Chavern of the News Media Alliance (a newspaper trade association) penned an opinion piece this past week in the Wall Street Journal making the case for media companies and news outlets to seek relaxed anti-trust scrutiny from Congress. This would enable collective bargaining by media companies with Facebook and Google, effectively pressing both companies to do even more to tip the tables back in favor of the journalists that are creating the content. According to Chavern, collectively “pushing for stronger intellectual-property protections, better support for subscription models and a fair share of revenue and data” would “build a more sustainable future for the news business.”

Clearly, with this week’s news, Facebook is trying to demonstrate their willingness to play ball with publishers, and possibly preempt any negative repercussions that may have come as a result of the News Media Alliance’s efforts. However, we shouldn’t expect Facebook to provide any quick fixes, especially if they come at the expense of shareholder value.

It’s just not a part of their mantra.