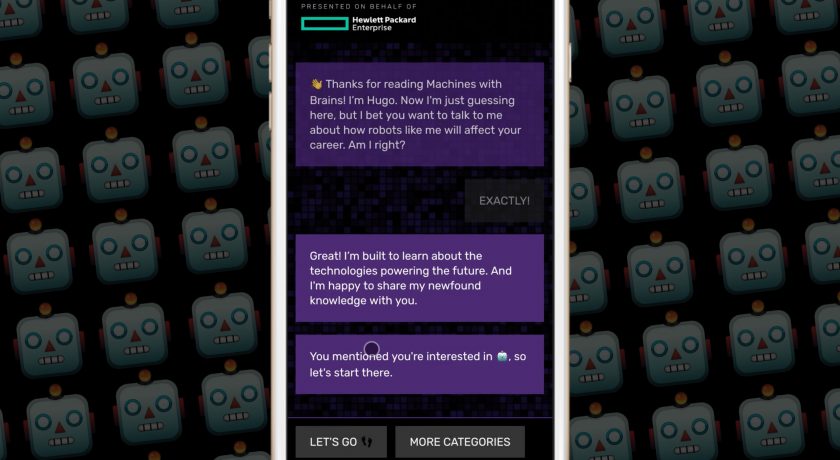 We named our AI chatbot Hugo.

There’s so much in a name. So much potential. So much expectation. When you’re a parent, you imagine your child’s path ahead and how the name you assign from the start plays out in different situations. On the playground, as a byline, in a board room. Is it powerful? Does it convey purpose but also sensitivity? What kind of human will this name make?

All our experiences balled up into an opinion about what to call someone, or for our purposes, some…thing.

Because even though Hugo isn’t exactly a child, we still thought about it that way. We thought about its personality, where it came from, what kinds of people it might encounter. We thought about what its interests might be, and what kind of conversations it would have as it learned more and more about the world around us – specifically the world of mind-bending technology.

At the most basic level, Hugo is an AI-powered chatbot that wants to make sure you know how tech is changing the world. Even more, it wants you to understand how you and your colleagues and your business can change the world, and it does that with a conversation.

Just chatting, the same way we all engage with one another.

It’s not trying to fool anyone into thinking it’s human. We’re all aware of just how creepy it gets down in the uncanny valley. Hugo is upfront about what it is and what it can do for you. And just like anyone you’d talk to on a regular basis, it’s learning your preferences and biases so it can support you or refute you. It’s understanding your expertise and suggesting connected thinking. And it’s doing it in the service of a brand – Hewlett Packard Enterprise.

This isn’t to say that the only things you’re going to hear from Hugo are about its parent company. Quite the opposite actually. What child wants to talk about their parents all the time? And who out there would want to hear that, anyway? What Hugo does is draw from dozens of sources to curate the most important transformative technology news of the day, and then make sure you know about it as quickly or slowly as you’d like. One chat at a time.

It’s also there, on your phone, on a messaging platform that you already use, whenever you want to ask it something. Hugo represents the transition from always on to always available. It’s an interaction that we expect. Even demand. Stay out of the way, but be there when wanted.

So that’s what Hugo does. It’s there when we want it, and learns when we need it. It’s about content and how we consume it; not getting in the way, not aggressively pushing an agenda, not advertising.

Over time, if you happen to really engage in a particular area of the conversation, and in the back-and-forth let Hugo know about a problem your business is having, Hugo might surface an HPE case study similar to your own situation. Thanks, Hugo.

Or if you’ve been reading and watching content that Hugo’s brought you, and you’re one of the rarified group of individuals who understand enterprise-level technology, then Hugo can send you blueprints and specs for specific HPE products. Because you asked, because you’re genuinely interested. Thanks, Hugo.

That interest, those affinities, those behaviors all add up to a potential customer, and not one who will be spammed, or is a waste of time for a salesperson to call. The conversations you’ve had, in the context of always available content, means that no one wastes time, that your engagements are as broad or specific as you demand, and that legitimate customers are separated from really smart and really curious audiences that might not want to buy an HPE solution, but appreciate that Hugo makes their life better anyway. Thanks, Hugo.

Now, we know that Hugo won’t be perfect right away. And that it won’t be perfect ever in fact, because Hugo is kind of like a baby. Making mistakes, but learning as it goes. If it gets to childhood and stays true to itself, well then that is a success. Chatbots and AI are an emerging territory. There will be loads of waste alongside earnest trial and error. Before we brought Hugo into the world we thought long and hard about what it could be, and we’ve done everything we can so it can live up to its potential. So that it can be proud of its name.

We can’t wait to see what Hugo will become. 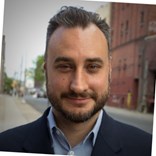 What’s Happening in the Shadows of Programmatic?