I have an important (and some may say overdue) announcement to make.

I am a transgender woman. Two years ago, I made the decision to come out and begin transitioning. This process has had its high points and lows, but I want to say that this next personal milestone would not have been possible without the love and support from all of you.

I’m happy to share that my name has been legally changed to Aubri (‘Bri’ for short). I also would kindly ask that everyone please refer to me using feminine (she/her/hers) pronouns going forward. I understand that habits can be hard to break, but I genuinely appreciate your every effort.

This announcement may come as a surprise to some people. If you have any questions, I am more than happy to sit down and chat in person or by e-mail. I’m also happy to provide other resources if you have additional questions.

Thank you to everyone for your love and support!

Let me let you in on a little secret. Writing out my coming out letter was easy. I had penned drafts in my head for years. I had mulled over my words while falling asleep at night, I had edited imaginary letters on my commute to work, I had time to reread and refine my thoughts and ideas while I waited in countless clinic waiting rooms. So, when it was time to actually put pen to paper, typing up the note was easy. The hard part was hitting ‘send’.

Coming out isn’t easy. According to the National Center for Transgender Equality, more than one in four transgender people have lost a job, been denied a job, or denied a promotion due to their gender identity. More than three-fourths have experienced some form of workplace discrimination. 16 states have lobbied to the Supreme Court for the right to fire people who are transgender. And the unemployment rate for transgender people is over three times the national average. Beyond the personal risks of losing friends and family, coming out comes with the professional risk of losing one’s job. It comes with the risk of losing health coverage. It comes with the risk of career suicide.

That’s why, on that sunny Monday afternoon two and a half years ago, I hesitated. I know I’m extraordinarily lucky – my manager supported me in my transition from the very beginning. My team was loving and accepting, and the folks who I had confided in had already showed that they were willing to support me in every way I needed. Even still, I hesitated before hitting ‘send’.

When I fired off that note, I held my breath. Then the responses started coming in. My colleagues responded with nothing but love. From across the country – Boston, Chicago, San Francisco, and everywhere in-between, they sent me their love and affirmation. My team in New York responded with the same. Our facilities manager even responded and promised to make sure that the name tag on my desk would be updated the very next day. In many ways, coming out at Digitas was one of the most affirming and positive moments in my career. I’m lucky that my workplace coming out story has a good ending. But I’m also keenly aware that my story is far too rare in my community

October 11th marks the 30th anniversary of National Coming Out Day. Coming out is difficult. It’s frightening. It’s full of risk. But it’s also a powerful statement. It’s a way to shout “I exist. I’m not the boogeyman that politicians paint me to be. I’m not the villain of your story. I’m a normal human being, just like you. “

Coming out has given me the power and privilege to advocate for change. Since that day, I’ve had the opportunity to speak in offices across the country. I’ve presented in front of hundreds onstage at the historic Hammerstein Ballroom in NYC. I’ve had the opportunity to talk to my heroes, like Janet Mock and Indya Moore. Behind the scenes, I’ve been able to help educate colleagues and mentor students, suggest policy and edit language. Coming out and telling my story has given me the power to drive change. And hopefully, we’re making things better for us all.

On the 30th anniversary of Coming Out Day, we take the time to honor and celebrate all who have come out. I’d also like to thank those who catch us when we leap out of our closets. To my team, my colleagues, my friends, thank you. 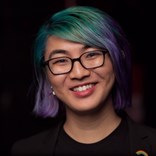 Aubri is responsible for helping shape and drive the culture in Digitas' NY Office. She drives diversity & inclusion programming within the office, and oversees the growth and development of Digitas' Employee Resource Groups (ERGs) - Chez Nous, the LGBTQIA+ employee network; Onyx, the African-American/Black employee network; Women@Digitas, the women's network; and Adelante, the Latinx employee network. Aubri also leads the LGBTQIA+ ERG nationally, and sits on the board of Egalite, the Publicis Groupe LGBTQ+ BRG (Business Resource Group).