Last week, while in great spirits and with a touch of matter-of-fact humor, I penned a quick update on Facebook confirming the “status” of Black History Month, after reports surfaced debating the use of the descriptor “Black vs. African American”.

To say my remarks hit a chord within my network and beyond would be an understatement.

I’ve gone through life wearing quite a few names and badges, most of which were created by others, for me. As I’ve grown in age and experience, I’ve been intentional about defining myself for myself. I’ve coached others in environments like ours to find their power and voice by doing to same. In fact, I closed my remarks on Facebook by simply stating: #OwnYourNarrative. That could have been a “drop the mic” comment on its own, because it’s the entire point.

As marketers, we bear an awesome responsibility to be curious, fearless, and even imperfect. For the sake of being politically correct, we often avoid questions like, “How do you identify?” or “What term would you prefer I use…?”  for fear that they could be seen as negative or even racially charged.

Fear kills curiosity. And lack of curiosity kills creativity. When we decide to be fearless and curious while exercising grace through our imperfections, we begin to see simple truths like those found in the beauty of someone’s definition of themselves. Check out this Buzzfeed video for an awesome example. 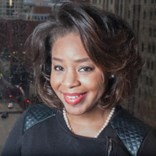 At Digitas, through Ronnie's media and D&I roles combined with her passion towards cross-cultural marketing, she has facilitated dozens of cross-cultural learning, development and immersion sessions across New York and Chicago, featuring partners such as AOL, Complex, Out Magazine, TVOne, BETand ESPN Deportes along with celebrities like Russell Simmons, Keri Hilson, Issa Rae, MC Lyte and Olympic Gold Medalist Cullen Jones.