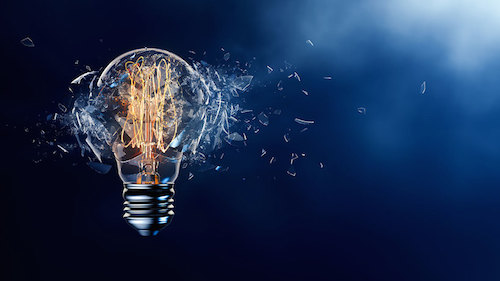 It’s beyond ironic that the companies most celebrated for dethroning the former titans of business are now themselves considered indestructible. There’s a belief that GAFA (Google, Amazon, Facebook, Apple) are now so dominant that they’ll never be unseated.  It’s hard to picture a world in which they’re not dominant, but it was once hard to picture the same of AT&T, GM, IBM and Microsoft. The tides that swept GAFA into their positions of leadership have not ebbed.

But there are several scenarios and trends that could erode what seems like their unassailable position.

The Silicon Valley credo is Disruption, so why should any of its denizens be exempt? As Clayton Christensen famously explained in his book, The Innovator’s Dilemma”, established companies don’t get disrupted because they’re stupid, near-sighted, and unimaginative. They get disrupted because the business demands of a successful, established company don’t permit them “to focus resources on proposals that customers reject, that offer lower profit, that underperform existing technologies and can only be sold in insignificant markets.” GAFA is clearly now among the established ranks, and there are several technologies that offer the potential to disrupt them:

People are increasingly rebelling against the interruptive nature of online advertising. If a significant amount of the population employs the means to opt out of advertising, that undermines a cornerstone of the Google and Facebook business model. The initial scare seems to have abated for now, but the storm has far from passed. In the nuisance scenario, it’s easy to see an escalating arms race of blocking and anti-blocking technology. In the more severe scenario, ad blocking could significantly reduce the eyeballs that are critical to their financial models.

While the GAFA are all racing to embrace AI, at least part of that embrace is driven by fear. The shopping feature of Alexa is naturally tied to Amazon, but that same technology can be applied to direct you to whoever had the best price, was the closest for pick up, and who most aligned with your social values. AI has the potential to bypass the aggregator function played by Amazon in commerce, Google in Search, and Facebook in social content. For example, I could ask my personal assistant “what are my friends up to?” and it could scan their social feeds, blog posts, and give me a synopsis. I wouldn’t have to go to a central site, nor would I care where it came from. Facebook could block access, but once you start battling human behavior instead of feeding it, the jig is up. Apple is even more susceptible to being upended by AI. Amazon, Google and Facebook all have vast sources of native data that could drive proprietary AI applications. Apple has far less. What has made them champions for some privacy advocates makes them especially vulnerable in a data-driven world.

In the long-term, as the ubiquity of computing grows, everything becomes a computer – clothes, appliances, cars, even body parts. The shift from desktop to mobile led to the rise and fall of many companies. What happens when the world shifts from mobile to...everything? When everything is a computer, nothing is. That is, when we’re immersed in an ever-present layer of computing, there is no single thing or place that contains our interaction with cyberspace. Combined with the developments in AI, this would lead to new behaviors that eschew having a few personal objects for connecting (Apple), a preferred source for searching (Google), a primary marketplace for buying (Amazon), and a common arena for interacting (Facebook).

While none of these companies are hurting for cash flow, each has potential financial vulnerabilities. Apple, Google and Facebook share a dependence on a fairly specific revenue source. Gary Bourgeault does a nice analysis of this dilemma. The most dependent is Apple, who’s current growth is almost entirely tied to the iPhone. Most companies dream about a similar asset, but it’s deep and narrow. The Apple Watch has seen steady but slow growth, many of its services have ceded prominence to other competitors (e.g., Apple Music to Spotify), and they’re late to the AI assistant world. So as new sources of penetration dry up for iPhones, Apple requires another huge hit that’s not clearly lurking in their current portfolio. Top of FormBottom of Form

For all its range of wonderful products, Google is subsidized almost entirely by its search and display advertising revenue. While the Search business made the deft switch from desktop to mobile, the broader vulnerability of the business model remains. As discussed above, AI has the potential to disrupt the Search model. Facebook made a more impressive switch to mobile which preserved their business model and their growth. They’ve also been quick to identify future competitors and co-opt or acquire them. For all that foresight, their business model still depends mostly on the interruptive ad model of traditional media – forcing people to see ads on their way to what they really want to see. While their targeting provides the promise of more relevant commercial messages, the same behavioral and cultural changes that threaten the efficacy of the traditional ad model threaten Facebook as well.

Amazon doesn’t suffer from a narrow revenue source. Amazon has grown an impressively diverse revenue base, but it’s been involved in a confidence game for its entire existence. The company has consistently been valued on how it’s positioned itself for the long term. That’s made it an aggressive pioneer in logistics, cloud services, and AI, to name just an impressive few. But Amazon has been valued on their future payoff for over 20 years. At what point will investors want to see the pot of gold at the end of the rainbow? It seems investors continue to be satisfied as long as they see revenue growth. And it may be that when revenues start to level out, it’ll be able to turn on the earnings lever. But it seems equally likely that it will find itself living in the low-margin world it created and forced to compete among the mortals whose valuations are based on measurable profit growth.

Google’s recent EU fine awakens a dormant vulnerability for all of GAFA. At some point, governments may decide each of them has just grown too big. Historical cases against IBM and Microsoft showed the halting effect of government litigation even without a technical legal victory. IBM and Microsoft were hamstrung by the drawn-out multi-year anti-trust litigation that forced them to pull back on their most aggressive initiatives while the action was ongoing to avoid providing additional fodder for the regulator’s case.

New privacy rules would also significantly affect all their business models, though those of Apple’s to a lesser extent. The US has allowed a relatively free rein, but actions in the rest of the world point to stricter requirements on how personal data is collected, stored and used. If that data became less available or costlier to use, that would significantly affect the existing business models which generally rely on the free use of personal data. Google and Facebook are especially dependent on ad revenue that’s tied to their targeting ability. If that targeting is hampered by privacy regulations, their inventory could become less attractive or more expensive.

Still other regulatory pressures are surfacing in the increased scrutiny of Facebook and other social media companies. Their long-standing argument that they should be treated as aggregators rather than publishers is losing sway as negative publicity piles up around online bullying, hate speech and fake news. A new law in Germany requires all social media companies to remove illegal content within 24 hours of notification. The cost of compliance would be felt in various ways, from operations to partnerships.

The legal threats in all these areas are closely tied to the political, and that does not bode well for the current titans. Changes in regulations follow changes in popular sentiment, and that is shifting as the former Davids have become the new Goliaths. Marketers dislike the duopoly of Google and Facebook who together represent 60% of US digital spend. When Facebook was found to have misreported engagement times on video ads, they essentially shrugged it off. Marketers have little of the leverage they’re used to having over media owners. Similarly, Amazon is now seen as a competitor to most every retailer. The popular culture that used to celebrate these companies as champions of the people are now as likely to paint them as stiflers of innovation and corporate bullies. So there is a steady accumulation of parties actively rooting against them.

It’s difficult to predict a single factor that would prove their Achilles heel. Yet the GAFA gang would have to defy economic history to maintain their current market position. That’s not to say they’ll go away. Many of their predecessors remain as successful businesses despite no longer being the undisputed dominator of their industries. That continued success is even more likely when you consider how brilliant current leadership has proved in anticipating new opportunities and threats. But to continue in their current positions would require an unprecedented combination of a reduced level of competition, a slower pace of technological innovation, and relaxed government intervention.

None of this is likely.

Doug works with the national capabilities leaders across the agency, including Account Management, Media, Strategic planning, S&A, and Technology to create more value for clients using the agency’s combined and core strengths.

VIEW ALL ARTICLES BY Doug Ryan

Blockchain: Not Ready for Real Time