Women’s history month is coming to a close, and what an interesting month and era it has been and is for women. For a lot of us, this feels like the first time that we are truly being seen and heard. There’s a cultural shift happening right before our eyes.

Women’s history month only officially began in 1987, a woman’s right to vote is only 98 years young -- but even younger than that is women of color’s right to vote, and it wasn’t until 1993 that women were allowed to wear trousers on the senate floor! And predating all of that is the founding of the first woman-run advertising agency - the M.C. Weil agency, which was started in New York in 1880. Even before we could vote, women were crushing it in the ad world and giving other women a voice.

With this, I give you: A Brief History of Women In Advertising

Our history is so intertwined with our objectification that a search engine as smart as Google assumes I want to learn about how we were portrayed in advertising versus our role in advertising.

Women helped lay the foundation for the advertising agency well before the Mad Men era, so why are we just being heard and seen now? Why are women still heavily objectified in ads? We’ve had a robust role in advertising, from the positions we’ve held, to the campaigns we’ve created, yet those roles and that progress have been overshadowed by sexist advertisements and behavior in the workforce.

Agencies are being forced to realize the inequities women face in the advertising space. In 2016, the #WomenNotObjects and the #IStandUp campaigns made waves in the ad community by pointing out how frequently women are objectified in advertisements. The objectification of women is such an issue that universities teach courses on the subject. It’s no wonder then that even with a long history in the business side of the industry, women still make up a small percentage of the C-Suite (Currently, just over 4% of Fortune 500 companies have a female CEO.) If we can’t create media that is respectful to women, how can we expect women to be respected within the industry?

So Now What? In The Wake Of #TimesUp

More and more campaigns (in the past decade) have given us powerful, feminist ads. From Always to REI, we see women being themselves and not objects in ads. Recently, Twitter -- a powerful social tool that also struggles to monitor the constant harassment of women on its platform -- released an ad during the Oscars called #HereWeAre to remind those in the film industry that women have a voice in the industry. This spot was similar to the one released by Twitter at CES to remind the tech community that women can’t be silenced in the technology space.

180 women executives launched Time’s Up Advertising as part of Women’s History Month and in the wake of the #MeToo and #TimesUp movements. Their mission statement is simple and powerful: Our mission is to drive new policies, practices, decisions and tangible actions that result in more balanced, diverse and accountable leadership; address workplace discrimination, harassment and abuse; and create equitable and safe cultures within our agencies.

The media we send out to little girls and boys has to change from the source itself -- the advertising agencies. We have to fix what’s broken within our industry so that we can produce more campaigns and content that will be on the right side of history. Women still go to work at ad agencies afraid to speak their mind, or afraid of their male counterparts’ inappropriate behavior -- until this stops, amazing ideas will continue to be stifled.

If we are going to create ads featuring plus-size women, trans women, women of color, then we need to hire and respect these women. Women need representation, both on the screen and behind the scenes. We need our male counterparts to see us, hear us, believe us, and promote us. Which side of the culture shift are you going to be on? We are making history -- right now -- because time is up.

Full disclosure: Digitas has signed and donated to the Time’s Up Advertising Fund, and is offering employee matching to any employee who wishes to donate as well. 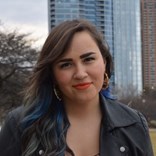 Data Lakes: Why a Lake and not an Ocean