My favorite moment in all of television is Callie and Arizona's wedding on Grey's Anatomy. The episode is heartfelt and honest, addressing homophobia and legal discrimination without overshadowing the joy of the wedding. This was the first time I ever saw a lesbian wedding, fictional or real. It was also one of the first times I realized I could get married, too.

Television plays a huge role in how we understand and interact with the world we live in. It teaches us about things that we have never experienced before. How many of us ever actually been in a courtroom for a trial? How about in an operating room for surgery? Television is what allows us to conjure up a mental image of what all of these things look and feel like, without ever being there. The images and storylines we see play out on TV intertwine with our lived experiences to form a mental understanding of how our world works.

My senior year of college, I used my sociology thesis as an opportunity to understand more about queer representation on TV and to prove what I already knew instinctively to be true: queer women get more out of watching themselves on TV than just the good feeling that they are being represented. What exactly makes this representation so meaningful for me, and for so many others?

What I found in my research was that seeing themselves on TV doesn't just make queer women happy because they like the recognition of their identity. It also provides them with a space to think about and question their identity privately. Viewers get to see queer lives on TV and follow characters week after week to understand what living as a queer person is like.

In his book Up From Invisibility, television scholar Larry Gross explains the reason this kind of representation is particularly important for queer people. Unlike many other groups of minorities, gay and lesbian people do not usually grow up with other queer people around them. Queer children likely grow up in a family with straight parents who have mostly straight friends, and it's difficult to understand that being queer is even a possibility without an example. Television opens a window into a totally different world for someone who didn't even know it was possible to fall in love with a person of the same gender.

I heard this repeatedly throughout the course of my research. Many of the women I interviewed for my thesis spoke about looking for as many queer characters as they could find, just to help them understand what a queer relationship looked like. These representations taught them that they could get married, have successful careers, come out to their families: TV taught them that they could live fulfilling and happy lives as queer women. They found validation in their feelings and saw the potential for a loving partner and queer community in their future.

This is why media representation holds so much power for queer people in particular. Queer representation doesn't just reflect what is already there, it actually gives queer people access to worlds we haven't yet experienced. This pride month and in the future, I encourage everyone to think a little more critically about queer representation. Be more conscious about the kinds of queer characters on television and how they represent queer life and relationships. Recognize how much power these representations hold, not only in their ability to reflect a diverse world, but in their potential to open up new ones. 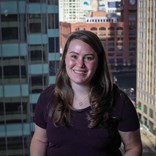