As DigitasLBi’s North American Diversity and Inclusion leader, she has been the architect of the agency’s corporate responsibility and inclusion strategy. Everyday she’s creating and executing against an inclusion framework for the agency’s business, talent and culture. In just the last 12-months Ronnie: Was selected to co-Chair the 4A’s Diversity Steering Committee; facilitated dozens of management and leadership trainings, under the Leading With Impact training module at DigitasLBi; lead and facilitated the national role-out of the agency’s Brave Spaces Program; helped push agency to increase The 4A's Multicultural Advertising Intern Program (MAIP) commitment by 15%; and became a Certified Career Management and Executive Leadership Coach; launched her own coaching practice in 2016 – The Dickerson Stewart Group. 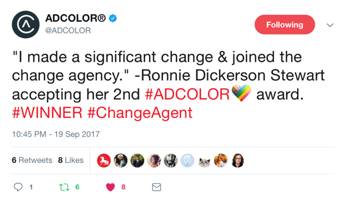 The ADCOLOR Award Nominees and Honorees are carefully selected from a large population of diverse influencers across the creative industries. The finalists are chosen by the individual’s representation of ADCOLOR’s motto, “Rise Up and Reach Back”. Those honored not only excel in their own careers, but also give back to the community and support their peers. Their goal is to create a network of diverse professionals to encourage and celebrate one another.

In 2013 the Harlem New York YMCA selected and honored Ronnie as a “Black Achiever in Industry”. In the same year, her peers in the DigitasLBi Chicago Media Capability honored her as their inaugural “Media Rock Star”. In 2014, she was recognized as a MAFA Master and Emerging Leader.