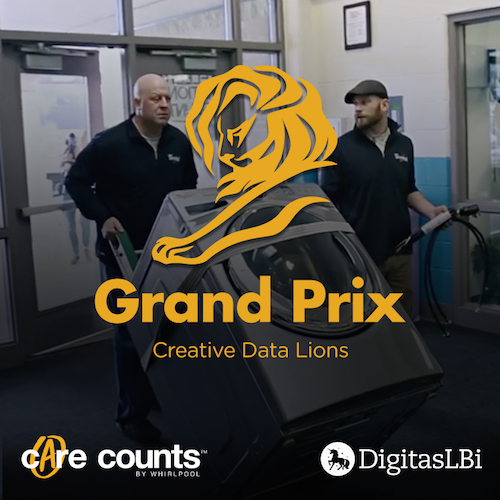 DigitasLBi has been awarded a Cannes Lions Creative Data Grand Prix for its Care Counts™ campaign for Whirlpool. The Creative Data Lions honor campaigns that exemplify creative use of data to produce real, impactful results. This year, only 0.0005% of 41,170 total entries were awarded a Grand Prix.

The Care Counts ™ campaign earned the following accolades in addition to the Grand Prix:

- Bronze Lion in PR for Integrated Campaign Lead by PR

- Shortlist in Outdoor for Use of Ambient Outdoor

- Shortlist in Entertainment for Excellence in Partnership in a Brand Experience

Care Counts ™ was launched in an effort to increase attendance rates in schools by providing students with access to clean laundry. The campaign came to life through the marriage of a data-driven approach and creative human elements: Studies show that one in five students struggle with access to clean clothes, ultimately resulting in absenteeism - an issue impacting an estimated five to ten million students each year. After installing washers and dryers in 17 schools, 90% of participating students increased their attendance rates, and extracurricular participation and overall attitude toward school skyrocketed. By August 2017, 60 schools will be enrolled in the Care Counts™ program.

DigitasLBi was also shortlisted for the following campaigns:

“We’re thrilled that Care Counts™ has been awarded the Grand Prix, the highest honor from the industry’s most celebrated awards show. Of all the Cannes Lions, Creative Data is the award we covet most, because it recognizes data-driven creativity—our agency’s core offering. We’re equally proud that the simple act of putting washers and dryers in schools is making a difference in children’s lives around the country,” says Tony Weisman, CEO, DigitasLBi North America.