PUBLISHED
SHARE
Brick Lane in Numbers is a new piece of research from Digitas which seeks to throw light on what data can tell us about an area and how people interact with it. This research focuses attention on the famous London street Brick Lane which is home to Digitas’s London office.

A total of 42,859 authors were analyzed. From this data set any account which posted more than 30 times was removed to avoid skewing the results – these were mostly local businesses. Data was collected by creating a geo-fenced area around Brick Lane and excluding any imagery that fell outside of this area.

The record store Rough Trade was the most mentioned business in the Brick Lane area. This was followed by the Big Chill bar which is located two doors down from Rough Trade. Food traders were well represented with Sticky Wings chicken shop, the famous Beigel Bake and French restaurant Chez Elles making up the top five. The notorious Cereal Killer Cafe also made it into the top ten in position eight. 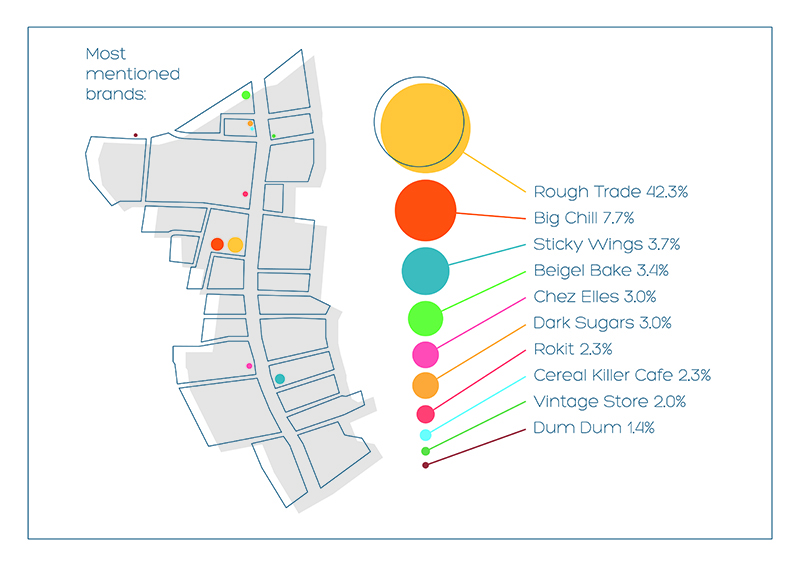 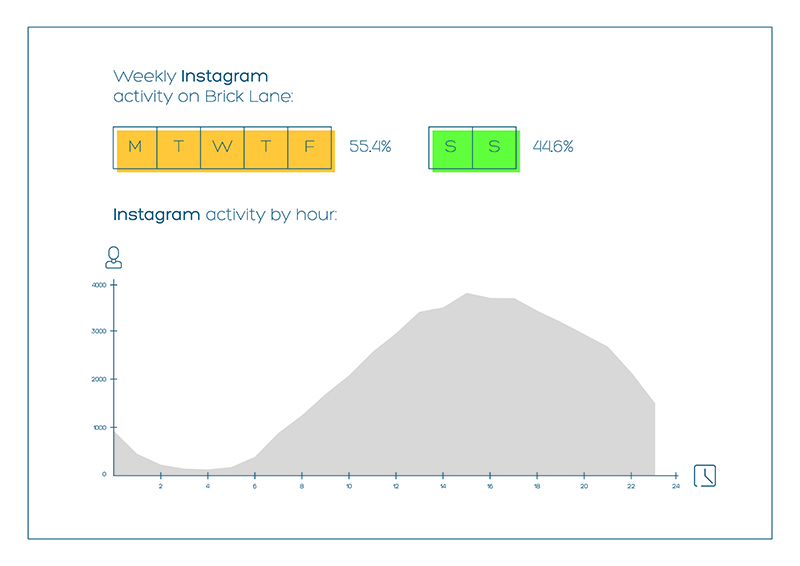 October was the most popular month for Instagram posters on Brick Lane, most likely fuelled by high profile art fairs such as the Moniker Art Fair and the Other Art Fair, both of which took place in the Old Truman Brewery. This was followed by September when Brick Lane played host to FriendFest, a high profile celebration of the US TV sitcom Friends. February was the least popular month for Instagram use on Brick Lane followed by January and March.

At a seasonal level, autumn was the most popular time with 43.7% of authors posting then. Summer was the next most prominent time with 25.7% of activity occurring then. 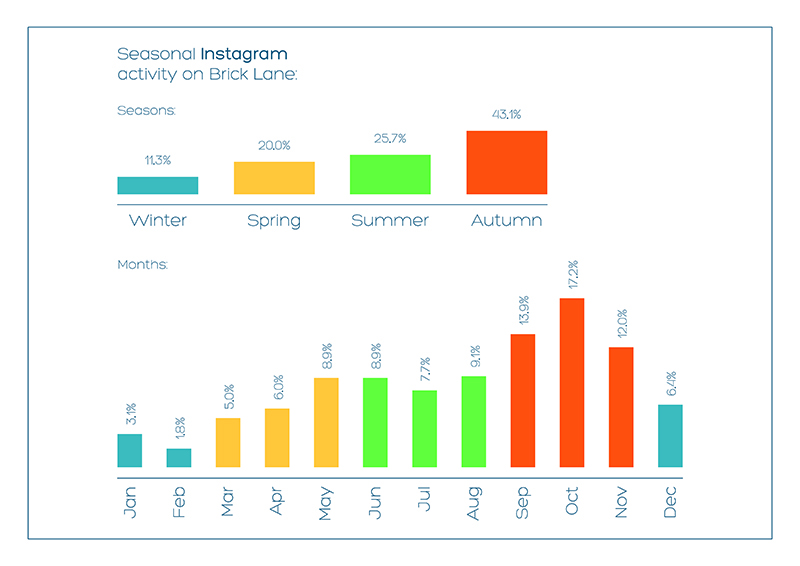 The busiest times for Instagram activity varied by area. The central area peaked at 3pm. The busiest time for the north section was 5pm. While the south saw most activity at 6pm. 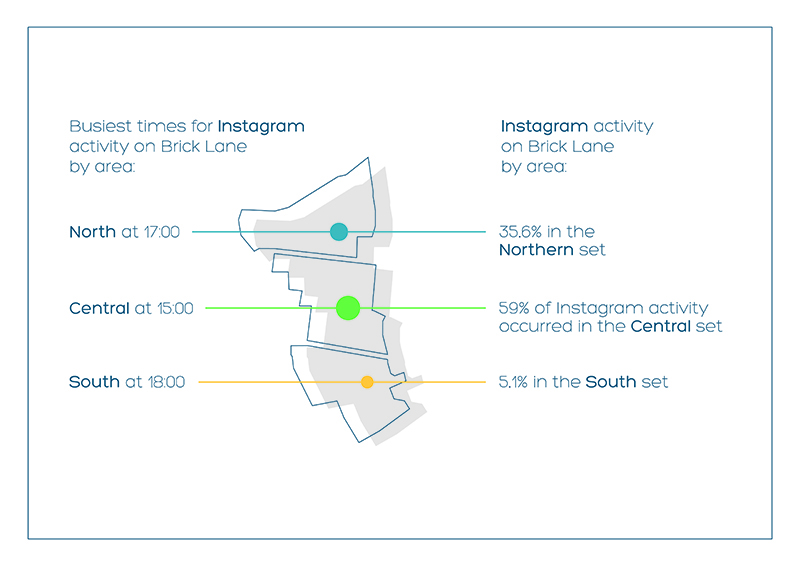 The data is a sampled view of the bike rides made each month as TFL do not disclose the full set. The analysis here focuses on all bike rides ending at Brick Lane which is a total of 16,009 rentals. Whilst some of the journeys appear short, it is worth noting that riders may check the bike in here after a first leg of a journey from somewhere else in order to stay within the free 30 minute limit.

The most commonly occurring start station was Brushfield Street, one of the nearest bike racks to Liverpool Street station, which is only a 0.5 – 0.7 mile ride away from Brick Lane. This represents 5.6% of all journeys made to Brick Lane over 2015. Other prominent locations to cycle from included Regents Row in Haggerston, Old Street Station and Pott Street in Bethnal Green. 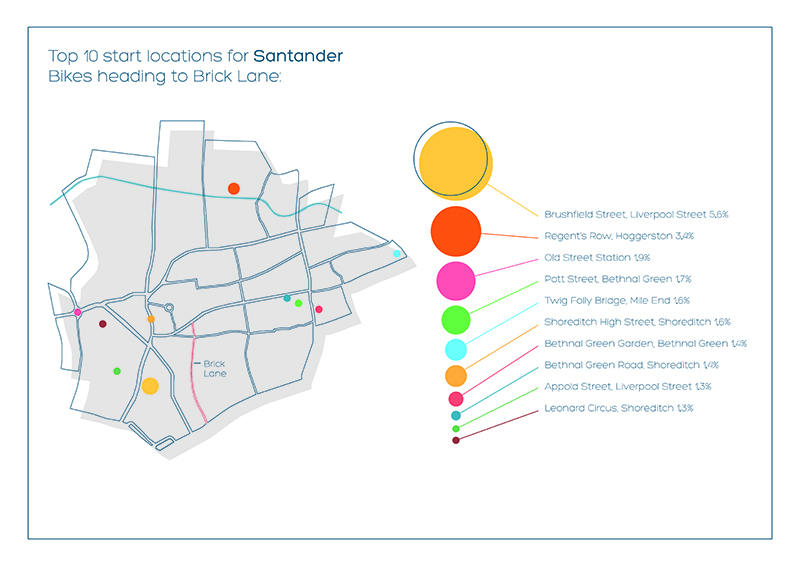 The longest rides are made at the weekend, in particular, Sunday. The average duration on this day is 28 minutes compared with the day with the shortest duration which is Wednesday at 14 minutes.

Saturday is the busiest day for Santander bike rentals arriving in Brick Lane (17.7%) with Friday being the next most popular day to travel by bike (15.4%). 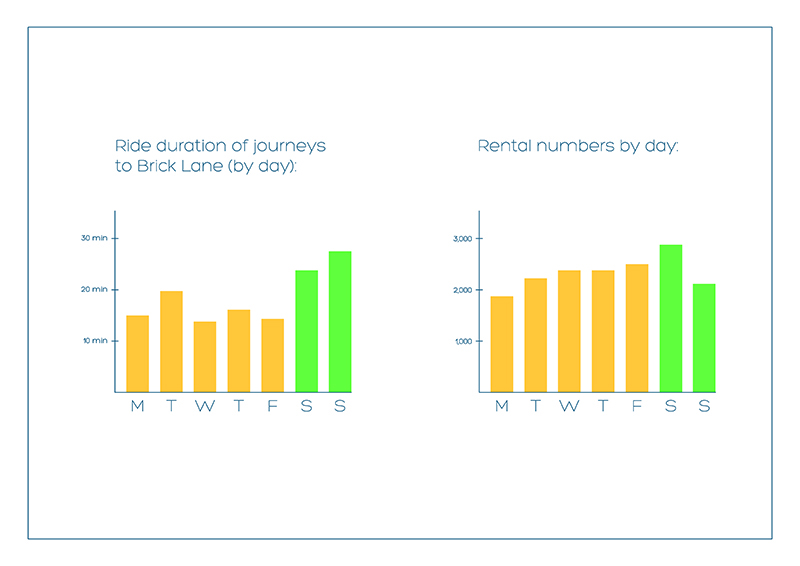 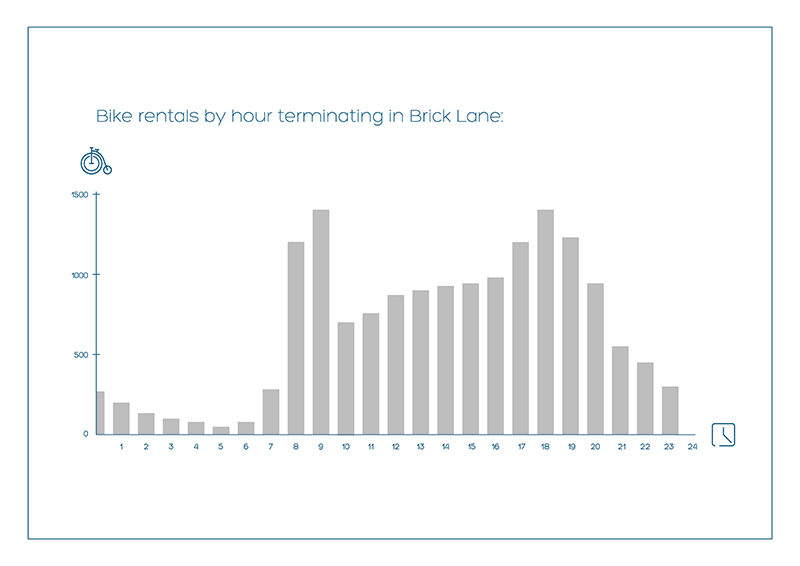 The summer months are by far the most popular months for Santander Rentals with 32% occurring over June, July and August. July is the busiest month with 11.1% of all rentals. 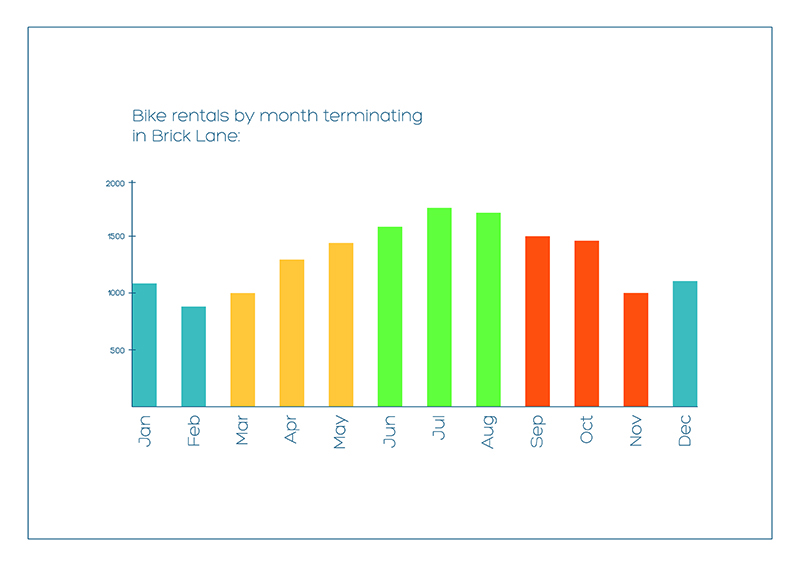 Data for the report comes from analysis of two key sources: Instagram and the Santander Bike Scheme. Instagram data was analysed to highlight what insights can be gleaned from social media usage. Bike Scheme data was assessed to discover what we can learn from publically available data sources.

The Instagram data set was captured across all months of 2015. Data for bike hires was taken from TFL open data sources available on the TFL website. Hire data for each month was gathered for all of 2015.