PUBLISHED
SHARE
When new trends and technologies burst onto the marketing scene, there’s always a frantic effort to either keep up or provide guidance, especially when serious amounts of money are involved. It happened withsocial media, it happened with personalisation and “Big Data” (it’s just data!), and it’s happening now with Artificial Intelligence.

When new trends and technologies burst onto the marketing scene, there’s always a frantic effort to either keep up or provide guidance, especially when serious amounts of money are involved. It happened withsocial media, it happened with personalisation and “Big Data” (it’s just data!), and it’s happening now with Artificial Intelligence. We’re approaching the top of the hype cycle where, like teenage sex, everyone is talking about it but very few are actually doing it. Conditions are perfect for the snake oil salesmen to move in. But there’s real substance behind some of work being done in this field, and in this blog post I’ll try to navigate through the fog of rhetoric to understand what’s required to make the most of the significant opportunities.

To go forward, let’s first look backwards. AI has been a popular subject in science fiction for decades, often running alongside robotics to create some of the most original storylines of all time, from the utopian (Star Trek, Her and I, Robot*) to the dystopian (Blade Runner, 2001, The Matrix and The Terminator), and everywhere in between. And, as a result, the term has become attached to the future, framing expectations around the art of the possible in the present.

As with all science fiction, it serves as inspiration for the people working on real life applications. We still have a way to go before we catch up with fiction, but actual developments have — in their own way — been no less notable. The Bombe that helped to decipher Enigma in WW2 meets the definition of AI, and it wasn’t the first of its kind. Machine learning has been around since the fifties, growing alongside the development of computers, and held back mainly by computational power. More recently, as processor growth has followed Moore’s Law, the high profile milestones have come thicker and faster, from Deep Blue beating Garry Kasparow in 1997, to Watson winning Jeopardy (and now trying to cure cancer), to Google’s DeepMind beating Lee Sedol at Go, through to Facebook’s Bots unveiled at F8 recently — one can argue that all of these qualify as Artificial Intelligence, and each one nudges the industry forward in a different way.

When developments in the real world start to mimic science fiction, this will get a lot of attention. We can anticipate lots of stories like this in the coming years. Apocryphal headline grabbers such as the Microsoft Barbie Bot will gradually be replaced by the exceptions-that-prove-the-rule such as the recent incident with Google’s self driving car (a.k.a. Johnny Cabs). The really big advances will come when we crack something called general artificial intelligence, and experts concur that we’re many years away from that, but in the meantime we can expect an array of intriguing developments.

There’s a clamour of investment taking place, usually a good sign of fire behind the smoke. From 2% of VC investment in 2013 to 5% in 2015, interest is significant and growing. Google, Facebook, IBM, Apple, Salesforce, Cisco, Intel and many more have invested hundreds of millions in this space over several years, particularly in the AdTech and finance fields. Our parent group Publicis.Sapient has bought a minority stake in Lucid.ai. Wired luminary (and all round good guy) Kevin Kelly says “The business plans of the next 10,000 startups are easy to forecast: Take X and add AI”.

So let’s take a step back and ask: What is AI? If you look at the dictionary definition, it’s a broad church. Arguably, a simple calculator qualifies as artificial intelligence. So, yes, I can see startups, vendors and suppliers claiming that their products and services include an element of AI. No-one can claim AI is a new thing, but it will sell regardless, so look out for wagons being hitched to that horse.

One way to start conversations with vendors, partners, and potential recruits and employers is by asking them what they mean by the term artificial intelligence. As with Big Data and Innovation, it means different things to different people, and a time can be wasted assuming you’re on the same page. There are fast moving developments on many different fronts, so it’s tricky proposition to pin down. We’ll need to develop our lexicon before we can sort the wheat from the chaff.

In the marketing and technology sector, this territory is (currently) dominated by the data scientists. The challenge extracting value from huge data sets is in some ways fueling the interest in AI. The goal here is to make even better use of data to support strategic planning and drive real-time decision making, reducing our dependency on expensive, fallible data scientists and customer support staff, and increasingly automating the next steps without human intervention. There is already a wide range of examples in this space, from automated pricing to predictive customer care, from personalisation to ad targeting, and more. This list of 15 examples is worth a scan.

And as time goes on we can expect these services to become more accessible to less technically-minded people. There has also been plenty of talk about bots, especially after Facebook introduced a way of embedding bots in their Messenger app (used by 900 million people, so it deserves attention). They refer to it as a hybrid between language recognition, decision tree mapping, and customer care — so essentially it’s a form of Interactive Voice Response for text. For the best examples, check out Poncho and either CNN or the Wall Street Journal on Messenger. The demos look good, but early results are poor. And even when it improves, this only barely qualifies as AI — until it reaches a greater level of sophistication it’s mostly creating the illusion of intelligence because of its dependence on pre-determined decision trees. That isn’t to say the bot approach isn’t worth exploring — far from it. Just don’t get lulled into thinking you’re in the vanguard of artificial intelligence while you’re at it, and get ready for a frustrating time in the short term.

While general artificial intelligence might be many years away, it’s worth keeping an eye on emerging developments in that space as well. They’ll probably be useful well before they hit their stated goals. One of the more interesting developments is viv.ai, a service beingdeveloped by one of the ambitious Siri co-creators, Dag Kittlaus.  Not only does he want to create a cloud-based platform for finding connections between disparate data sets, he wants to put a universally-recognised voice interface on it. He’d like his ‘V’ logo to be as ubiquitous as the bluetooth logo, so we know how to engage with the system. Apparently we speak 3-4 times faster than we write, so this makes sense so long as the system isn’t plagued by the same challenges as Siri or Google Now. When it comes to voice interaction in general, theearly signs from Alexa (from Amazon) are very promising, so maybe we’re on the cusp of a breakthrough here.

The broad consensus is that we shouldn’t think of AI as simply improving the tasks we currently perform. We should also think that it can approach problems in completely different and unexpected ways to achieve much greater outcomes (with AlphaGo’s behaviour being a great early example). “Reinforcement learning” — teaching computers how to learn for themselves — appears to be a more fruitful approach than “human teaching” or decision tree mapping, as it’s  less constrained by our own human shortcomings. This is also where Neural Networks such as this interesting experiment from TensorFlow come in. In their own words, the network is “asked to solve a problem, which it attempts to do over and over, each time strengthening the connections that lead to success and diminishing those that lead to failure”. It’s a general principle that applies to one of the most interesting areas of AI.

On this front, we don’t know exactly where the emergence of Artificial Intelligence will take us, which makes the whole venture so exciting. Certain aspects — those relating to general artificial intelligence — will be exponential by their very nature. That’s when things get scary very quickly, and for a taste of that I highly recommend this Wait But Why article. When people like Elon Musk and Stephen Hawking says there’s a significant danger, it’s time for all of us to sit up and take notice.

In the short term though, we can start looking for opportunities to exploit AI technologies as they mature and generate new forms of value. It’s important to get a early, solid understanding of how the opportunity can be exploited and, as with the technology waves that came before, a few well-chosen bets may pay off handsomely. She who dares wins, but let the buyer beware!

*We’ve had some fun debates in the studio about whether these qualify as utopian or not! Some say that Her was actually dystopian because it represents a sad version of humanity, but maybe society itself was utopian and it’s humanity that’s flawed. One thing’s for sure — it’s a better world than The Matrix! 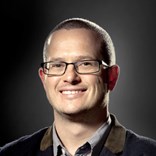 Phil is the Innovation Director for the APAC region, based out of Sydney. He first joined Digitas in 2004, and his main experience extends across the travel, finance, mobile and technology sectors.

VIEW ALL ARTICLES BY Phil Whitehouse