PUBLISHED
SHARE
Senior Account Director at Digitas, Christopher Blacklock, reports on a talk given by VR visionary Jaron Lanier entitled 'the future of our digital lives'.

In the heart of Westminster Jaron Lanier is tuning his begena, an ancient Ethiopian harp. We all sit enthralled as this twenty stone Silicon Valley visionary finally plays an entrancing ditty – for 2 minutes he lulls us into a false sense of security having taken us to a dark place for the last hour… a dark place where pornography and paedophilia in VR are talked about, a world where we are all being manipulated by tech companies and yet he believes the worst is still to come.

‘Facebook is killing the internet’ – a strong opening gambit from Lanier. He engages the audience immediately and talks eloquently about the engagement of extremism and how the key Facebook metric of ‘engagement’ is causing global strife. Note to self: must move client away from this performance metric. The algorithm used by Facebook ensures that negativity rises up the rankings and encourages shareability and engagement. This has been driven by monetisation which in this sense has created total monopolies – Google included – that are becoming ever more powerful and gaining in influence. Amazon & Microsoft less so, however, as their algorithms are not centred around ‘addiction to the feed’ or manipulation of the user. The message is simple – STOP USING SOCIAL MEDIA AND FEEDING THE MACHINE.

More solutions are talked about and the key one to resonate is the creation of a ‘paid for’ internet, along the lines of a subscription. The belief is that this model would improve many things including lessening the influence of Facebook and Google. It would create a more level playing field where influence cannot just be bought; a service which would be more customer-centric and less about filling the coffers in the short term. A longer term view by tech companies would allow for greater industry stability and acceptance across the board.

The belief that we are still in the early days of the internet with crude code and algorithms ruling is striking; it is clearly a double-edged sword. A future where the experience is only going to get more intense yet more refined, a future where government plays a more important role in governing the internet with certain types of addictive code being made illegal. There is a growing sense of uneasiness in the audience at the thought of politicians having a greater say in ourbeloveddigital world.

Even Hitler and Trump are mentioned in the same sentence when the rise of extremism and the current breaking down of society is talked about – hardly surprising. The power in the digital world sits with the few rather than the many. However, there is a sense that the tides are changing and people are beginning to realise the negative influence of allowing tech to rule rather than a more positive experience of  people driving the technology.

In short, we end with an inspiring ideal where we all need to be more human – quite a statement from the man who pioneered VR. The advent of Google glass was bad – its minimal nature where it becomes less obvious to external parties is confusing and makes us introverted. The larger headsets for VR are raved about – the point being we should all enjoy a more shared experience rather than an introverted one.

I came to this speech with the hope of learning of a brighter digital future, not one where a dystopian Blade Runneresque world is being acted out in reality - a bleak digital reality where we are all merely play things for these omnipotent tech companies.

I leave with a glimmer of hope where a more human-centric approach is lauded. The idea of a ‘paid for’ internet model is a radical view of the future and one that will be surely debated for a long time to come. I for one hope that in the first instance, the over-manipulation that is in proliferation disappears. 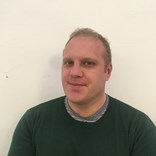 As Senior Account Director at Digitas, Chris is the lead on the E.ON mobile account and is also part of the team leading the Honda F1 & social accounts. He’s been at the agency since 2015 and has worked on Nissan, Kellogg’s, Travis Perkins and JLL. A career highlight to date has been when Chris was the in-house Digital Lead for Beko, managing digital for the brand when it was transitioning from manufacturer to consumer brand and helping the brand manage its social channels at a time of crisis.

Can brands be the moral guardians of the internet?