PUBLISHED
SHARE
Content is the last C word of marketing and digital media - often misused, never defined and frequently offensive to the ears.

But content is not “stuff we’re going to upload to the thing”.

As marketers we should think of content not as a fashion but as a strategic business asset, a product to offer to customers and stakeholders, in fact. Content can play a vital role in driving awareness, traffic, sales, and reputation throughout the customer journey to create a comprehensive experience.

And yet this is how it is routinely seen: left to the final stages of projects, developed in isolation, or created to fit within stringent containers for the sole purpose of filling (or ticking) a box. And that’s if you ignore content briefed in “to go virals on the social”. 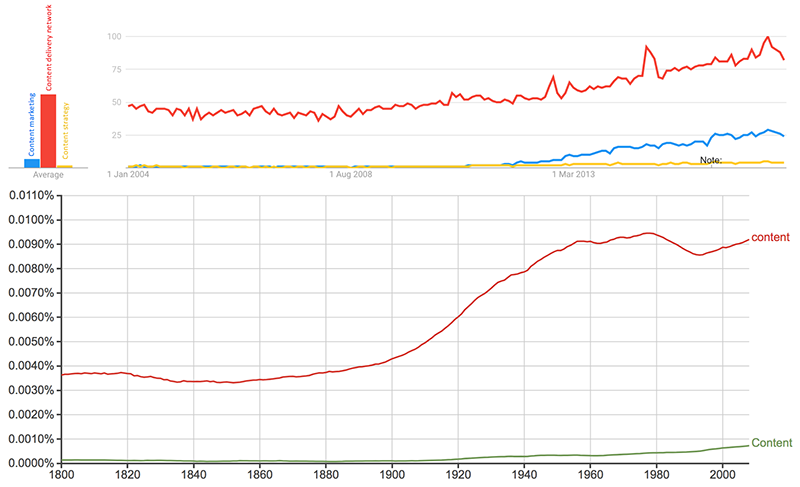 In accordance to Marshall McLuhan’s famous aphorism, discussions about content often become inextricably blended with those about media channels or systems of communication. It is a modern day given that the medium isn’t just a neutral “container” of a message. New technology and the platform wars have unlocked how we consume, purchase and relate to content. Music and books have already seen massive changes, and now long-form video is the battlefield between creators, distributors and digital platforms, as the television set becomes a big smartphone, cable/over the air networks become the internet, and the social networks seek to keep people in their walled gardens for longer and longer.

It was in this vein that I was talking to colleagues at Digitas the other day about content, using formats or media as a proxy signifier for the actual content itself but also as a vehicle that shapes expectations and the content’s message. To structure the conversation about content I started to map how different media types influence content and the way it is encountered.

It led me to two axis: an Axis of Transmission and an Axis of Experience. 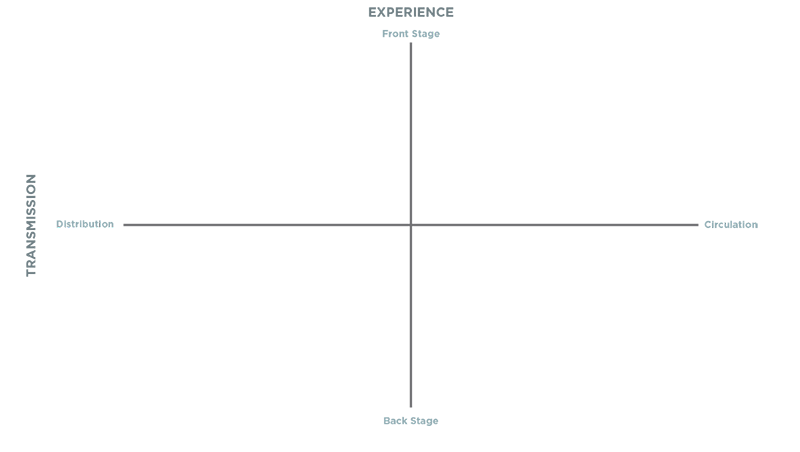 The issue of how content reaches its ultimate recipient has been part of “content conversations” for years, but the means and expectations behind the transfer has evolved in that time. Content is/was king because it acts as a ‘strategic lever for technology’ determining whether people adopt a new platform or Betamax it out of existence. Content is ‘the thing in the boxes’ with big companies battling to create ever better boxes.

The classic Creator to Distributor to Audience relationship underpinning this is still with us, but it has shrunk in the face of the networked, active forces of modern media and technology.

Back in 2013 Henry Jenkins, Provost’s Professor of Communication, Journalism and Cinematic Arts, USC, co-authored a book called Spreadable Media: Creating Meaning and Value in a Networked Society, with Sam Ford and Joshua Green. This book popularised the concept of Circulation which I believe is still very relevant to any discussion about content.

Jenkins et al talked about ‘participatory culture’ that requires understanding content flows. In this world we should stop focusing on distribution and instead think about circulation. This charts a journey away from traditional publisher, one-to-many models of communication and moves toward diversified, many-to-many, networked models.

Circulation takes the content to the people; the spread of that content requires us to actively listen to what people are saying, where they’re finding the content, and how they’re sharing it around.

Designing content for circulation acknowledges that different audiences circulate for different purposes, and invites people to shape the context of the material as they share. Success in an era of circulation requires harnessing dispersed networks, so producing content in easy-to-share formats is key but also ensuring that the content is already where the audience exists is vital.

Importantly Jenkins’ concept does away with the idea of audience as a passive, media-ratings panel waiting to receive your content and give it their monetisable eyeballs. Such notions of passivity came from media industries trading using attention metrics in a world where creating content and finding an audience were difficult and expensive. The distribution based model was the only game (at scale) in town. That is not the case anymore. But it is not gone either. Not everyone wants to “be a co-creator”, not everyone has access to the technologies of participation or the skills to reprocess or the desire and connections to share at scale.

Instead I believe it is important to consider the transmission of content in terms of a spectrum from distribution to circulation. While it may be tempting to think baking in circulation is a panacea to all our questions about modern content, it doesn’t mean anyone is listening, after all half of YouTube videos don’t get 500 views. As Danah Boyd put it:

“Now the commodity isn’t distribution, it’s attention — and guess what? Who gets attention is still sitting on a power law curve…we’re not actually democratising the whole system — we’re just shifting the way in which we discriminate.”

So while the idea of network transmission is important it is not the most important concept. People are vital, which leads us to a second axis.

When thinking about how people relate to content it is tempting to fall back on those industry conventions of ‘Attention’ and ‘receptive audience’. Such an ‘Axis of Attention’ would give us a simple scale from passive audience to active agents who impart ‘real existence’ to the content, completing its meaning through interpretation and actively reprocessing, re-cutting or commenting away. 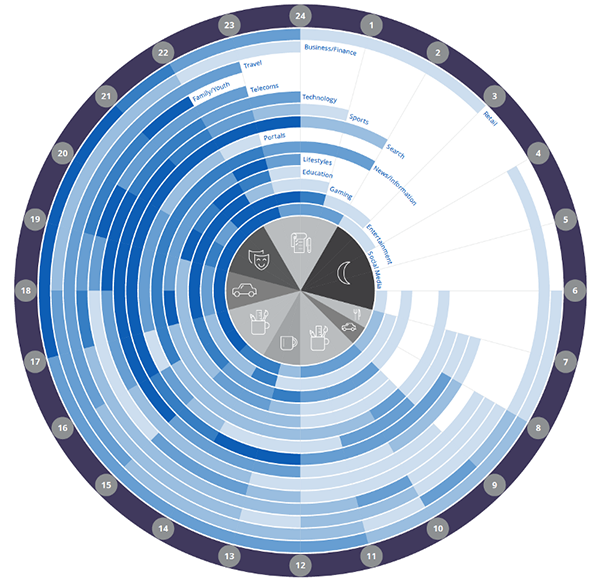 At first I thought we should take a ‘job to be done’ or behaviour driven approach to get better insights into what people are really doing with content. The challenge with this approach is that it creates difficult decisions as to the taxonomy — how do we label it, what gets included, what are the relationships?

Instead I have to thank Matt Locke for his recommendation about the sociology of Erwin Goffman, and Bijker & Pinch’s social construction of technology.

As Matt put it:

Understanding the audience experience as a social one, rather than individual, is a much more interesting way of thinking. There never really is a truly passive audience, as most media/content is consumed or performed within some kind of social context.

Front Stage is “that part of the individual’s performance which regularly functions in a general and fixed fashion we define the situation for those who observe the performance. Front, then, is the expressive equipment of a standard kind intentionally or unwittingly employed by the individual during his performance”. It is how we act when in front of other people or the public.

In contrast the Back Stage is where “the performer can relax; he can drop his front, forgo speaking in his lines, and step out of character”. It does not necessarily mean we are alone though — watching a boxset at home on the sofa with your partner could easily qualify.

In both stages content and media are props. They are social objects that we use to tell a story about ourselves and relate to others. Using Front and Back Stage as the basis of an ‘Axis of Experience’ means that when we look at content we are always mindful of its social context, how it is being used and its role in communicating who we are. It also means that if we are thinking about content from a marketing point of view then we start with the person we want to reach not what we want to say.

To put the theory into practice I asked a few people to plot various media channels and formats, from a consumption rather than creation perspective, using the two axis of Transmission and Experience. Below is a synthesis of collected views. 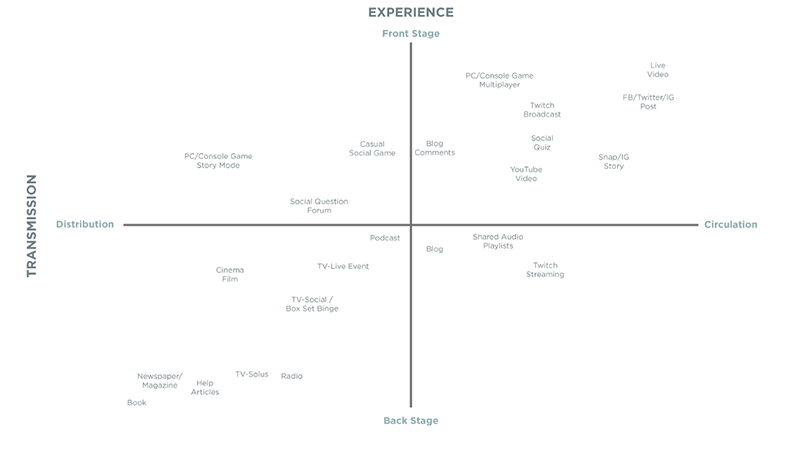 At this moment it’s just a conceptual view but easily confirmed with survey or behavioural data. What is interesting is the rough alignment of media types between the Distribution/Back Stage and Circulation/Front Stage quadrants. This pattern reveals another way of thinking about content for marketers. 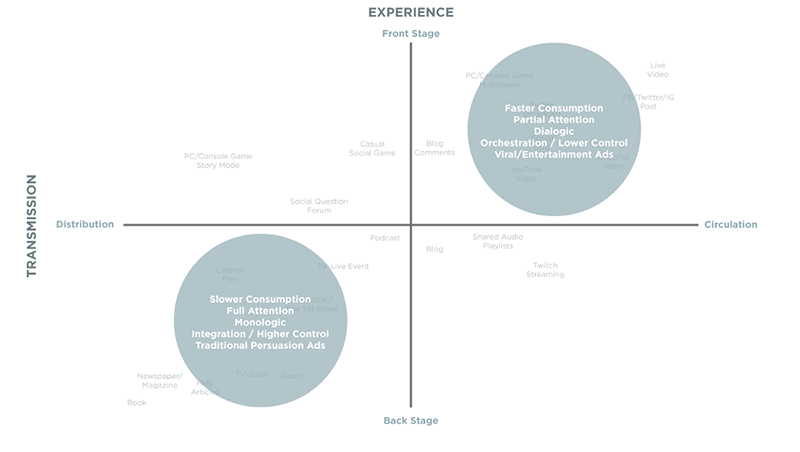 The traditional media in the bottom left quadrant are characterised by slower consumption with greater, even full attention. From a Marketing Content point of view the communication is Monologic — more subject to authorial control and a singular voice — with integrated branding and higher control of messaging, essentially a lower risk play often monetised by familiar persuasion and imagery-focused advertising.

In contrast the ‘brave new world’ of fashionable digital channels in the top right quadrant exist in a context of performative identity, high speed consumption, partial attention and very short lifespans. It’s a world where a Tweet has a lifespan of 18mins, a Facebook post lasts for 2hrs and a YouTube video has a grandfatherly 2 months of fame. Marketing Content thrives here when it is Dialogic— containing a “plurality of independent and unmerged voices and consciousness, a genuine polyphony of full valid voices”. Branding is orchestrated around some fundamental characteristic of the brand (not necessarily a ‘Purpose’), which can accommodate multiple creative expressions over time, or simultaneously. There’s less control here and so greater risk but that is a consequence of having to compete for attention when people are automatically blocking out the ~2k commercial messages a day with which they are bombarded. This is a quadrant of entertainment-driven marketing content that’s good enough to share and talk about, content that has identity signposting built in. 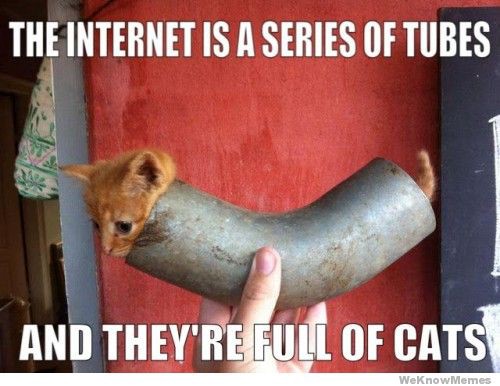 This way of mapping media reveals certain quadrant characteristics that means we should be mindful of when adapting creative and messaging to the media acting as a vehicle. Hopefully considering how content is transmitted and how it is experienced can help influence successful and useful Marketing Content, however, ultimately we need to think less about the pipe and more about the context and message. As my gran says, “it’s what’s on the inside and what you do with it that counts”. 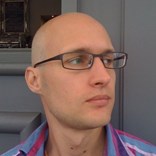 David recently won a Gold APG Award and was named Google Planning Innovator of the Year. Formerly Planning Director and Head of UX at JWT London, David led digital strategy for clients such as J&J, Shell and HSBC.

The evolving dynamics of the direct-to-consumer market

VIEW ALL ARTICLES BY David Carr