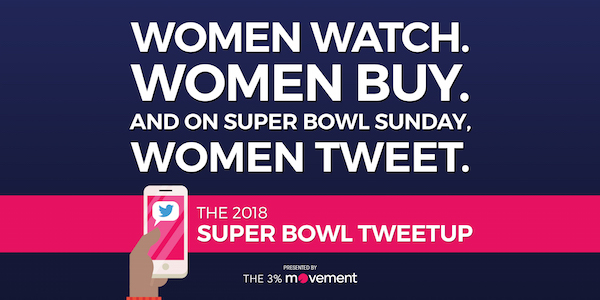 - DigitasLBi will proudly partner with The 3% Conference and The Representation Project to host the 5 annual Super Bowl Tweetup during the big game on Sunday, February 4, 2018.

- Each year the Tweetup sparks real-time conversation around the depiction of women in advertisements during The Big Game – an event that attracts 100+ million viewers worldwide, half of them women.

- For the 3 year in a row, DigitasLBi will host San Francisco’s only live Tweetup location.

- In past years, Tweetup hashtags have generated more than 59+ million impressions during game day alone.

- “DigitasLBi is proud to lend a voice to the 3% Movement by hosting the annual Super Bowl Tweetup for the third year in a row. This year is more important than ever to get involved with this Tweetup and join the wave of mobilization happening across the globe that women demand equal respect and power in our industry and all others,” says Ashley Sanders, Women at DigitasLBi San Francisco lead.

- “After a tumultuous year where the #MeToo movement brought issues of sexual harassment into the spotlight, we expect consumers to have heightened awareness of the way women are portrayed in advertising on the most-watched broadcast of the year,” says Kat Gordon, founder and chief executive officer of The 3% Movement. “We encourage viewers to watch the game and to tweet to brands who are including women respectfully in their messages, as well as those missing the mark.”

More information about the Super Bowl Tweetup can be found here: https://www.3percentmovement.com/tweetup.

Started as a passion project to spotlight a huge business opportunity in advertising -- the lack of female creative leadership and its impact on connecting with an overwhelmingly female marketplace -- the 3% Conference has grown exponentially since its 2012 launch and has hosted 23 sold-out events in cities globally. For additional information about the 3% Movement please visit: https://www.3percentmovement.com/.

About The Representation Project

Using film and media as catalysts for cultural transformation, The Representation Project inspires individuals and communities to challenge and overcome limiting stereotypes so that everyone, regardless of gender, race, class, age, sexual orientation, ability, religion, or circumstance, can fulfill their human potential. Jennifer Siebel Newsom founded The Representation Project (a 501c3) in 2011 in response to the overwhelming public demand for ongoing education and social action in support of her first film, Miss Representation. Since then, The Representation Project has released Newsom’s second directorial film, The Mask You Live In, and become well known for creating popular campaigns such as #NotBuyingIt, #RepresentHer, and #AskHerMore. Learn more at therepresentationproject.org.